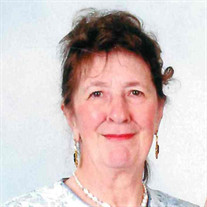 Florence (Draugelis) Smith, age 80, of Danville, passed away on Thursday morning, November 12, 2020, a resident of Emmanuel Center for Nursing and Rehabilitation in Danville. She was born on April 12, 1940 in Girardville, a daughter of the late John M. and Victoria G. (Toucheloskie) Draugelis. Florence attended the St. Vincent DePaul Elementary School and later graduated from the Girardville High School in 1957. In 1959, she moved to Washington, DC where she was employed by the CIA, and later by the Census Bureau and the Naval Research Laboratory. Florence was a passionate pro-life activist, lobbying and testifying in the Maryland State House. She never missed the March for Life rallies in Washington. In 1986, Florence helped establish and became the Executive Director of the Forestville Pregnancy Center (MD). Though not affiliated with the Roman Catholic Archdiocese of Washington, DC, the Center trained many permanent diaconate candidates. Florence brought the pro-life message to Lithuania, the homeland of her father and her mother's parents. Beginning in 1991, Florence made four extensive trips to Lithuania and Latvia through the introduction of her daughter who first traveled to Lithuania as a legislative assistant on the US Senate Foreign Relations Committee. She spoke to seminarians, priests and doctors who were very receptive to the pro-life message. She and her brother Ed and sister Mary in July, 1998 visited Lithuania including to visit the former family farm still adorned after many years of Communism by a traditional wooden cross. A devout Roman Catholic, Florence spent many hours in adoration of her Lord. She was a former member of St. John Evangelist Church in Clinton, MD and Ascension Catholic Church in Bowie, MD before relocating to Danville. She took a Christmas trip with her sister Mary to France, Switzerland, and Italy during Anne's junior year in college. She made a pilgrimage to the Holy Land, was dipped into the Jordan River and rode a camel. She made a pilgrimage to Mexico with Anne where she visited the Shrine of Our Lady of Guadalupe. Florence loved sewing clothes for her daughter when she was young and volunteering at school and church. She took pride in her vegetable garden and roses. She loved cooking, entertaining and Maltese dogs. In addition to her parents, Florence was also preceded in death by two sisters, Anne Malarkey, Helen Draugelis, and four brothers, John Draugelis, Blaise Draugelis, Joseph Draugelis, and Edward Draugelis, Sr., and her former husband, John Pershing Smith. Survivors include her beloved daughter, Anne Victoria Smith of Durham, NH, two grandsons, John and Lucas, a sister, Mary T. Draugelis of Danville, who provided devoted and selfless care during the many long stages of Alzheimer's, a sister in law, Shirley M. Draugelis of Danville, as well as many nieces and nephews. A Mass of Christian Burial will begin on Wednesday, November 18, 2020 at 10:00 am at St. Joseph's Catholic Church, 68 Center St., Danville with Rev. Timothy D. Marcoe, celebrant. Graveside committal services will immediately follow in the St. Vincent DePaul Cemetery, Frackville. The Allen Funeral Home, Inc., 745 Market at Eighth Streets, Bloomsburg is honored to be serving the Smith family. Memorial contributions in Florence's name may be made to: Your Loving Choices, 904 Market St., Bloomsburg, PA 17815 or the Alzheimer's Association, 57 N. Franklin St., Wilkes Barre, PA 18701.

Florence (Draugelis) Smith, age 80, of Danville, passed away on Thursday morning, November 12, 2020, a resident of Emmanuel Center for Nursing and Rehabilitation in Danville. She was born on April 12, 1940 in Girardville, a daughter... View Obituary & Service Information

The family of Florence (Draugelis) Smith created this Life Tributes page to make it easy to share your memories.