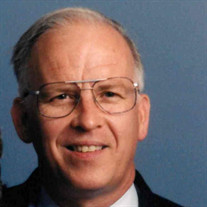 Ezra B. Watkins, 78, of Catawissa, went to be with the Lord on Sunday, January 3, 2021. Ezra was born February 11, 1942 in Scranton, Pa. He was the son of J. Haydn and Dorothy (Blewett) Watkins. He was a 1959 graduate of Scranton Central High School. He earned a bachelor’s degree in music in 1963 from Houghton College, NY He also attended the University of Michigan and earned a master’s degree in music from Temple University. He taught music at the London College of Bible and Missions in London, Ontario, Canada. Ezra was a ministerial graduate of Northeast Bible Institute in Green Lane, PA and served as NBI music director. He also served as music instructor and director of music at Valley Forge Christian College in Phoenixville, PA. He was employed for many years at DeLuxe Homes in Berwick, and finally at Bloomsburg University, retiring in 2007. He was a gifted pianist and organist and touched the lives of many through his music ministry. That ministry included playing for church services, many weddings and funerals, Bible studies at the Catawissa Senior Center, and Vacation Bible Schools. Ezra loved the Lord and served Him faithfully. His commitment to God was the foundation of all he was as a person. Ezra was a faithful member of Bethel Assembly of God Church, Catawissa, where he served as church pianist and organist and was involved in children’s ministry for 50 years. His 45 years of conducting Vacation Bible Schools throughout the area with his wife Claire have impacted many children. In addition to his dedication to God, Ezra was dedicated to his family as a loving husband and father. He was preceded in death by his father, mother, brothers Joseph Watkins and David Watkins, nephew William Fray, and several brothers-and sisters-in-law. He is survived by his beloved wife Claire (Rarick) Watkins, with whom he would have celebrated 50 years of marriage in August 2021. Also surviving are his daughter Rebecca; son David; and his sister Esther Watkins Fray, as well as brothers-and sisters-in-law and many nieces and nephews. A private family burial will be held. A memorial service to honor Ezra will be announced at a later time. Ezra will be greatly missed, but we are assured that he is now in heaven because of his trust in the Lord Jesus Christ as his personal Savior. Memorial contributions may be made in Ezra’s memory to: Bethel Assembly of God Church, PO Box 45, Catawissa, PA 17820. The Allen Funeral Home, Inc., 745 Market St., Bloomsburg is honored to be serving the Watkins family.

The family of Ezra B. Watkins created this Life Tributes page to make it easy to share your memories.

Send flowers to the Watkins family.