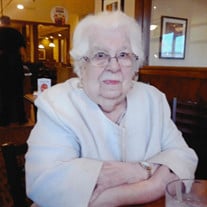 Esther May Matyas, age 92, of Bloomsburg, passed away on Tuesday, November 19, 2019, at her home surrounded by her loving family. Esther has lived in Bloomsburg since the age of 18. She was born on Saturday, April 30, 1927 in Philadelphia, a daughter of the late Roy and Ida (Tronseau) Shaffer. On June 12, 1946, Esther married her loving husband, Harold J. Matyas, who preceded her in death on June 1, 1972. Esther was a life long member of the Community of Christ Church, Bloomsburg. She was active in the VFW and the American Legion, where she was past President of Ladies Auxiliary of the VFW and American Legion. She was a member of the Berwick and Bloomsburg Senior Citizens Centers and enjoyed playing in the Senior Citizens Band. Esther was a volunteer at The Moose Lodge, and was a Girl Scout Troop Leader. Esther enjoyed spending her time making homemade candy and cookies for her children and grandchildren during the holidays. She also enjoyed watching cooking and game shows on TV and trying new recipes from cookbooks. In addition to her parents, and husband, Esther was also preceded in death by seven brothers. Survivors include her children; two daughters, Delores M. Dippel of Bloomsburg, Bonnie J. wife of Dan Dieffenbacher of Billings, MT, a son, Kenneth H. Matyas and wife Colleen of Bloomsburg, five grandchildren, Jamison R. Dippel and wife Koral, Abigail B. Dieffenbacher, Clay D. Dieffenbacher, Eric H. Dieffenbacher, Melissa S. wife of Brandon Faux, three great grandchildren, Paisley Faux, Remi Faux, Hunter Faux, as well as many loving nieces and nephews and her beloved pet cat Miss Kitty. A time of Visitation for family and friends will be held on Monday, November 25, 2019 from 10:00 am to 11:00 am at the Allen Funeral Home, Inc., 745 Market at Eighth Streets, Bloomsburg. Funeral Services will begin on Monday, November 25, 2019 at 11:00 am at the Allen Funeral Home, Inc. with, Elder Janice Rishe, officiating. Graveside committal services will immediately follow in the Elan Memorial Park, Lime Ridge. The Allen Funeral Home, Inc., is honored to be serving the Matyas family. Memorial contributions in Esther's name are suggested to: Community Of Christ Church, 750 Market St., Bloomsburg, PA 17815. Friends and family wishing to send a memorial gift, share a personal memory or offer condolences to the family, a Memorial Tribute Page in Esther’s honor and a Sympathy Store are available at www.Allen-FuneralHome.com.

Esther May Matyas, age 92, of Bloomsburg, passed away on Tuesday, November 19, 2019, at her home surrounded by her loving family. Esther has lived in Bloomsburg since the age of 18. She was born on Saturday, April 30, 1927 in Philadelphia,... View Obituary & Service Information

The family of Esther May Matyas created this Life Tributes page to make it easy to share your memories.

Esther May Matyas, age 92, of Bloomsburg, passed away on Tuesday,...

Send flowers to the Matyas family.