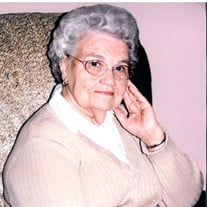 Esther E. Chapin, age 90, of Slatington and formerly of Orangeville, died on Thursday, December 7, 2017, a resident of The Gardens at Orangeville. Esther was a resident of her home in Slatington for over 2 years and was a resident of the Orangeville area for nearly 70 years. Esther was born on Wednesday, January 5, 1927 in Cragle Hill, PA, a daughter of the late George Hastings and Martha Jane (Taylor) Remphrey. Throughout her younger years she attended the Fishing Creek Schools and later graduated from the Benton High School. In addition to being a homemaker, farmer, and mother, Esther assisted her husband in the family plumbing business. On March 16, 1946, Esther married her loving husband, Ashabel R. "Bud" Chapin who died July 30, 2004. Esther was a member of the Orangeville United Methodist Church. She enjoyed spending her time reading, baking and she faithfully attended her great grandchildren's soccer games. In addition to her parents and husband, Esther was also preceded in death by 4 brothers and 1 sister. Survivors include her three children: Mary Jane (Ned) Hill of Orangeville, Diane L. Chapin of Slatington, and Richard Chapin of Schnecksville; daughter in law, Gail Chapin of Coopersburg, granddchildren: Heather Yordy (Jeff) of Millville, Shawn Hill (Chrystal Miller) of Orangeville, Joshua Chapin (Nichole) of Clayton, NC, and Megan Willman (Christian) of Coopersburg, PA; 11 great grandchildren, and a sister: Ethel Hess of Orangeville. A time of Visitation for family and friends will be held on Saturday, December 16, 2017 from 10:00 am to 11:00 am at the Orangeville United Methodist Church, 402 Mill Street, Orangeville. Funeral Services will continue on Saturday, at 11:00 am with Rev. Ellen B. Scamahorn, officiating. Private family graveside committal services will immediately follow in the St. James Cemetery, Stillwater. The Allen Funeral Home, Inc. is honored to be serving the Chapin family. In lieu of flowers, memorial contributions in Esther's name are suggested to: The Parkinson's Foundation 200 SE 1st Street, Suite 800, Miami FL33131. Friends and family wishing to send a memorial gift, share a personal memory or offer condolences to the family, a Memorial Tribute Page in Esther’s honor and a Sympathy Store are available at www.Allen FuneralHome.com.

The family of Esther E. Chapin created this Life Tributes page to make it easy to share your memories.

Esther E. Chapin, age 90, of Slatington and formerly of Orangeville,...

Send flowers to the Chapin family.