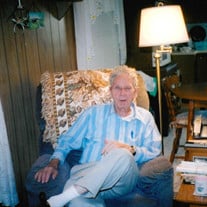 Ernest Young, Jr. age 91, a 50 year resident of Scott Township, died on Tuesday, September 19, 2017 a resident of Grandview Health Homes, Danville. Ernest was born on June 12, 1926 in Mt. Pleasant Twp.. a son of the late Ernest, Sr. and Mary (Peterman) Young . Ernest graduated from the former Scott High School in Espy . After graduation Ernest faithfully served his country during World War II in the 15th Infantry and with whom he fought in The Battle of the Bulge. He was honorably discharged from the US Army with the rank of Corporal. During his younger years, Ernest worked on the family farm logging and doing many other tasks, his sons would help also. For nearly 30 years, Ernest was employed by Magee Carpet Co. and Scott Township for many years until his retirement . Ernest was a member of the Bloomsburg Christian Church. He enjoyed spending his time doing lawn work and caring for his large garden with the help of his wife. He became the primary caregiver for his wife, Pauline, until she passed on October 16, 2006. In addition to his parents, Ernest was also preceded by his wife of 60 years: Pauline D. (Ball) Young: two sons: Robert E. Young and Dale E. Young and two grandsons: Richard Loreman and John Johnson, Jr. Survivors include his daughter and caregiver: Barbara A. Johnson and companion, David H. Krum, of Orangeville and son: David E. Young, Sr. of Danville; grandchildren: Kelly Morris and husband, Ron, Jason Young and companion, Holly Newhart, Wendy Roberts and husband, Lee, Shelly Brown, David Young, Jr. and wife, April, Joanne Faus and husband, Terry; 15 great grandchildren; two great great grandchildren: two siblings: Howard Young of Danville and Barbara Pfleegor of Orangeville and a loving companion and care giver: Opal Steinruck of Danville. A time of Visitation for family and friends will be held on Monday, September 25, 2017, from 1 to 2 pm at the Bloomsburg Christian Church, 107 Deussen Drive, Bloomsburg. Funeral Services will continue at 2 p.m. at the church with Lead Minister, Eric Miller, officiating. Graveside committal services with Military Honors by combined American Legion and VFW group will immediately follow in New Rosemont Cemetery, Espy. The Allen Funeral Home, Inc., is honored to be serving the Young family. Memorial contributions in Ernest's name are suggested to: The Bloomsburg Christian Church, 107 Deussen Drive, Bloomsburg, PA 17815 . Friends and family wishing to send a memorial gift, share a personal memory or offer condolences to the family, a Memorial Tribute Page in Ernest’s honor and a Sympathy Store are available at www.Allen FuneralHome.com.

The family of Ernest Young Jr. created this Life Tributes page to make it easy to share your memories.

Send flowers to the Young family.