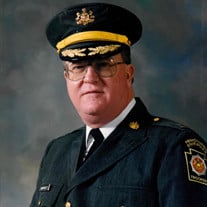 Ernest Humphreys Jr., age 76, of Bloomsburg, went home to be with his Heavenly Father on Tuesday, January 18, 2022. Ernie was a resident of his home in Bloomsburg for over 40 years and previously lived in Bangor, PA for 21 years. He was born on Friday, January 18, 1946, in Easton, PA a son of the late Ernest and Dorothy (Compton) Humphreys. Ernie graduated from Bangor High School in 1963. After graduation he served three years as a Spec 5 with the United States Army Band and Chorus in Fort Dix, New Jersey. He graduated from Pennsylvania State University with a Bachelor of Science Degree in Criminal Justice. Ernie served with the Pennsylvania State Police for thirty-one years. He served as a Trooper in Avondale and Embreeville stations. While at the Embreeville station he was assigned to the Patrol section as the Public Relations Officer where he visited over two hundred schools a year with safety programs. He received five Letters of Commendation from the Governors of Pennsylvania for his work in high schools regarding driver education and drug prevention. Ernie was a member of the State Police Scuba Diving team, Patrol Corporal at the Embreeville station and the Crime Corporal at the Bloomsburg station. As a Sergeant, he was the Station Commander at the Towanda, Dushore, and Swiftwater stations. As a Lieutenant, Ernie was assigned to the State Police Academy and commanded the S.E.R.T. Special Emergency Response Team (SWAT Team), The Scuba Diving team, Mounted Horse Detail and was responsible for establishing the Departments K-9 Drug Team. In Montoursville he served as the Patrol Section Commander and in Hazleton he served as the Staff Services Commander. He was promoted to Captain and was assigned to Departmental Headquarters in Harrisburg, PA where he served as the Planning Director in the Bureau of Research and Development. Upon retirement as Captain from the Pennsylvania State Police he served under the United States Marshal Service as the Lead Court Security Officer at the United States Court House in Williamsport, PA. Ernie actively served in church ministries, which included working in youth groups and church boards. He was a current member of Christ Wesleyan Church, Milton. In addition to his parents, Ernie was also preceded in death by a brother, George Humphreys. Survivors include his beloved wife of 52 years, Gail V. (Troxell) Humphreys of Bloomsburg, four children: Kristen D. Devlin and husband, Shane, of Turbotville and their children; Cade, Masy, and Kailey; Kim G. Humphreys and wife Angela Covato of Pickering, Ontario, Canada, and their children, Cassandra G. Malandrino and Cecilia Covato; Allison E. Flick and husband, George, of Danville, and their children, Hannah S. Flick and Holton S. Flick; Mark E. Humphreys and wife, Amanda, of Bloomsburg, and a brother, Robert Humphreys and his wife, Yvonne, of Bangor, PA. A time of Visitation for family and friends will be held on Saturday morning, January 22, 2022, from 10:00 am to 11:00 am at Christ Wesleyan Church, 363 Stamm Road, Milton, PA. Funeral Services will begin on Saturday, January 22, 2022, at 11:00 am at Christ Wesleyan Church, 363 Stamm Road, Milton with Rev. Arlie Davis, officiating. Graveside committal services will be held privately in Canby Lutheran Cemetery with military honors provided by the combined VFW and American Legion Honor Guard. The Allen Funeral Home, Inc., 745 Market at Eighth Streets, Bloomsburg is honored to be serving the Humphreys family. Memorial contributions in Ernest's name are suggested to: Meadowbrook Christian School, c/o Humphreys Memorial, 363 Stamm Road, Milton, PA 17847 or American Diabetes Association (donations to be directed to family in need).

Ernest Humphreys Jr., age 76, of Bloomsburg, went home to be with his Heavenly Father on Tuesday, January 18, 2022. Ernie was a resident of his home in Bloomsburg for over 40 years and previously lived in Bangor, PA for 21 years. He... View Obituary & Service Information

The family of Ernest Humphreys Jr. created this Life Tributes page to make it easy to share your memories.

Send flowers to the Humphreys family.