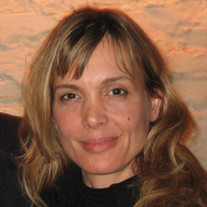 Erica Magagna, age 55, passed away at her home in Danville after an incredibly brave and determined 9 year struggle against leukemia. She succumbed only after exploring every possible cure known to science, including some highly experimental ones at the University of Pennsylvania, which she embraced hoping they might not only help her but might lead to breakthrough treatments for many other patients as well. Erica was born in the colorful and exotic city of in Tangier, Morocco, on May 16, 1964, to Diane (Ringawa) Magagna and John F. Magagna. She spent her early years in Morocco, where her father was headmaster of the American School of Tangier, returning to Wyoming Valley in 1968. She was subsequently schooled at Wyoming Seminary Lower School in Forty Fort, The Community School in Teheran, Iran and graduated from Bloomsburg Area High School, class of 1982. After graduation, she enrolled at Hood College in Frederick, Maryland majoring in Biology. After a period of time, she left Hood to get married and raise her children. Years later, she settled in Oregon where she was employed in the transportation industry and was also enrolled in flight school with the intent of becoming a commercial pilot. Unfortunately, ill health forced her to return to the Bloomsburg area where she would have the love and support of her extended family. Erica was a loving and caring person, devoted to her children. She had a strong connection with and deep love for animals, especially dogs and horses. She became a highly skilled rider and, as with many people with serious illnesses, she drew strength and courage from her frequent rides with her horse, Bennie, who was the son of the famous triple crown winner, Seattle Slew. She was also never without her dog Marley who accompanied her wherever she went. A private ceremony will be held for Erica's close family members. In lieu of flowers, and for those wishing to celebrate her life, a donation can be made to the SPCA at 1467 Bloom Road, Danville, PA 17821. Erica was predeceased by her Maternal grandparents, Dr. Peter and Winifred (Davey) Ringawa of Nanticoke, and by Paternal grandparents Peter F. and Muriel (Hauser) Magagna of White Haven, and by her beloved mother, Diane (Ringawa) Magagna. Surviving are her father, John F. Magagna, and her two children Gavin Hawk and wife Breanna, Ali Brown and husband Mike, grandchildren Ava and Emmerson Brown and siblings, Diane Sherman, Jessica Snyder and John F. H. Magagna. The Allen Funeral Home, Inc., 745 Market at Eighth Streets, Bloomsburg is honored to be serving Erica's family. Friends and family wishing to share a personal memory or offer condolences to the family, a page in Erica's honor is available at www.Allen FuneralHome.com.

Erica Magagna, age 55, passed away at her home in Danville after an incredibly brave and determined 9 year struggle against leukemia. She succumbed only after exploring every possible cure known to science, including some highly experimental... View Obituary & Service Information

The family of Erica Magagna created this Life Tributes page to make it easy to share your memories.

Erica Magagna, age 55, passed away at her home in Danville after...

Send flowers to the Magagna family.