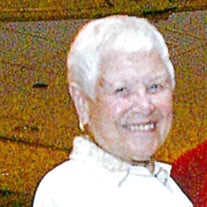 Elva L. Livsey, age 99, of Bloomsburg, passed away on Monday, January 11, 2021, a patient of the Penn State Hershey Medical Center. Elva was a resident of Bloomsburg all of her life until August, 2019 when she moved to Cornwall, PA to be near her son and daughter in law. She was born on Thursday, July 14, 1921 in Pine Twp., a daughter of the late George Benjamin and Erma Blanche (Poust) Derrick. Elva married her first husband, Edward C. Boudman who preceded her in death on April 5, 1964 and her second husband Tom Livsey who preceded her in death on April 7, 1996. Elva was employed by Magee Carpet Company as a Lab Technician until her retirement in 1970. She was a member of St. Paul's Episcopal Church, Bloomsburg where she enjoyed singing in the choir and had previously sang in the St. Matthew Lutheran Church choir. Elva enjoyed spending her time ballroom dancing, and gardening. She loved the ocean and beach and taking rides in the country. In addition to her parents and two husbands, Elva was also preceded in death by a son, Edward C. Boudman, a grandson, Brian Boudman, and six siblings, Calvin Derrick, Delbert Derrick, Raymond Derrick, Ruth Eyerly, Adra Lawton, Ethel Landeau. Survivors included a beloved son, John R. Boudman and wife Linda of Cornwall, PA, a grandson, Edward T. Boudman and wife Jamie of Gilbertsville, three great grandchildren, and a daughter in law, Mary Boudman of Bloomsburg. A time of visitation for family and friends will be held on Monday, January 18, 2021 from 3:00 pm to 5:00 pm at the Allen Funeral Home, Inc., 745 Market at Eighth Streets, Bloomsburg. Private services will be held at the convenience of the family with burial in New Rosemont Cemetery, Espy. The Allen Funeral Home, Inc., is honored to be serving the Livsey and Boudman families. Memorial contributions in Elva's name are suggested to: St. Paul's Episcopal Church, East Main St., Bloomsburg, PA 17815.

Elva L. Livsey, age 99, of Bloomsburg, passed away on Monday, January 11, 2021, a patient of the Penn State Hershey Medical Center. Elva was a resident of Bloomsburg all of her life until August, 2019 when she moved to Cornwall, PA to... View Obituary & Service Information

The family of Elva L. Livsey created this Life Tributes page to make it easy to share your memories.

Send flowers to the Livsey family.