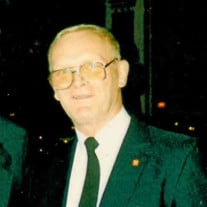 Edwin A. "Ed" Eyerly , age 83, of Bloomsburg, passed away on Wednesday, October 23, 2019, a patient of The Gardens at Orangeville. Ed was a resident of Bloomsburg his entire life. He was born on Thursday, August 13, 1936 in Bloomsburg, a son of the late Arthur C. and Myreta (Yost) Eyerly. Ed faithfully served his country in the U.S. Marine Corps, enlisting in 1956 and was honorably discharged in 1959. On September 1, 1967, Ed married his loving wife, the former Cecelia A. Viltko who preceded him in death on April 10, 2010. For over 25 years, Ed was employed by A.C.F., Milton until his retirement in 1998. Ed was a former member of Wesley United Methodist Church, Bloomsburg. He was a life member of the Bloomsburg V.F.W. Lodge #804, where he served as Past Commander and was appointed and served as National Aide de Camp. Ed was also a life member of the Bloomsburg Elks Lodge #436, the Bloomsburg Moose Lodge, the Bloomsburg Firemens Relief Association, the former Winona Fire Company, Bloomsburg, and The North American Fishing Club. Ed enjoyed spending his time fishing, and loved spending time with his nephew Chuck Eyerly and his great great nephew Addix Eyerly. In addition to his wife and parents, Ed was also preceded in death by a brother, Charles Eyerly, Sr. Survivors include his sister, Patricia E. wife of Terry W. Hock of Bloomsburg, and a nephew, Charles "Chuck" Eyerly, Jr. and wife Shirley of Stillwater, and many other beloved nieces and nephews. Ed is also survived by his beloved greyhound dog, Sonny. A time of Visitation for family and friends will be held on Monday, October 28, 2019 from 5:00 pm to 7:00 pm at the Allen Funeral Home, Inc., 745 Market at Eighth Streets, Bloomsburg. Memorial Services will be conducted on Monday at 5:00 pm. by The Bloomsburg Elks Lodge. Funeral Services will begin on Tuesday, October 29, 2019 at 10:00 am at the Allen Funeral Home, Inc., with Rev. Mark F. Reisinger, officiating. Graveside committal services will immediately follow in the Creveling Cemetery, Bloomsburg, with military honors being provided by a combined American Legion and V.F.W. groups. The Allen Funeral Home, Inc., is honored to be serving the Eyerly family. Memorial contributions in Ed's name are suggested to: Wesley United Methodist Church, 130 West Third St., Bloomsburg, PA 17815 or The Wounded Warrior Project, P.O. Box 758516, Topeka, KS 66675 8516. Friends and family wishing to send a memorial gift, share a personal memory or offer condolences to the family, a Memorial Tribute Page in Ed’s honor and a Sympathy Store are available at www.Allen FuneralHome.com.

Edwin A. "Ed" Eyerly , age 83, of Bloomsburg, passed away on Wednesday, October 23, 2019, a patient of The Gardens at Orangeville. Ed was a resident of Bloomsburg his entire life. He was born on Thursday, August 13, 1936 in Bloomsburg,... View Obituary & Service Information

The family of Edwin A. "Ed" Eyerly created this Life Tributes page to make it easy to share your memories.

Send flowers to the Eyerly family.