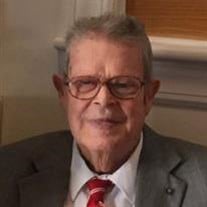 Edward A. Stark, age 93, of Danville, and formerly of Montrose, PA died on Friday, December 14, 2018, a patient of the Emmanuel Center for Nursing and Rehabilitation in Danville. Edward was a resident of Danville for over 6 years. Edward A.... View Obituary & Service Information

The family of Edward A. Stark created this Life Tributes page to make it easy to share your memories.

Send flowers to the Stark family.