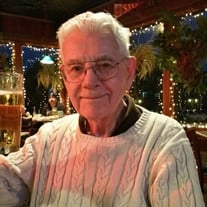 Edward W. Spangler, age 95, of Bloomsburg, passed away on Friday morning, April 22, 2022, at his home with his loved ones by his side. He was born on Sunday, January 16, 1927 in Philadelphia, a son of the late Edward W. Spangler and Edna Mae. He faithfully served his country in the United States Army during WW II and was honorably discharged in 1946. Edward studied at Drexel University, Philadelphia before beginning what would be a 30 year career with General Electric as a aerospace engineer where he had many accomplishments such as designing bridges and space satellites now displayed in the National Science Museum. He retired in 1987 to one of his favorite places: the Charleston House in Ocean City, NJ that he owned and ran for many years prior. Though his work was important to him, his family was everything. He married the love of his life, Jeanette (Sohmer), in 1972. Together they raised a beautiful family and traveled to many places all over the world. Edward lived to offer a helping hand wherever it was needed, from his uncle's grocery store, to tutoring in Ocean City, NJ, to teaching young mothers at St. Girard's, to managing the Ronald McDonald House. He passed on his love of math through magic squares, textbook lessons, and dinner table quizzes with his children and grandchildren. In addition to his parents, Edward was also preceded in death by two sons, Robert P. Kraus and Thomas Spangler. He is survived by his beloved wife of 49 years, Jeannette Spangler of Bloomsburg, two daughters, Janet L. Siegman and husband Glenn of Mount Pleasant, IA, Diane M. Watkins of Bloomsburg, a daughter-in-law, Heide Kraus of Bensalem, PA, nine grandchildren, Alyssa Massahos and husband Mat, Michael Kraus, Adam Siegman and wife Amanda, Lindsay Davis and husband Elliot, Ashley Ellison and husband Ryan, Kristie Siegman, Billy Watkins and wife Davina, Kyle Watkins, Olivia Watkins, and nine great grandchildren, who he took great joy in. Edward was a humble, kind, loving, and infectiously funny man who will be greatly missed by all who knew him. A time of visitation for family and friends will be held on Friday, April 29, 2022 from 10:00 am to 11:00 am at St. Columba Catholic Church, 342 Iron St., Bloomsburg. A Mass of Christian Burial will begin on Friday, April 29, 2022 at 11:00 am at St. Columba Catholic Church with Rev. Richard J. Mowery, celebrant. Graveside committal services will immediately follow in New Rosemont Cemetery, Bloomsburg with military honors provided by the combined V.F.W. and American Legion Honor Guard. The Allen Funeral Home, Inc., 745 Market at Eighth Streets, Bloomsburg is honored to be serving the Spangler family.

Edward W. Spangler, age 95, of Bloomsburg, passed away on Friday morning, April 22, 2022, at his home with his loved ones by his side. He was born on Sunday, January 16, 1927 in Philadelphia, a son of the late Edward W. Spangler and... View Obituary & Service Information

The family of Edward W. Spangler created this Life Tributes page to make it easy to share your memories.

Edward W. Spangler, age 95, of Bloomsburg, passed away on Friday...

Send flowers to the Spangler family.