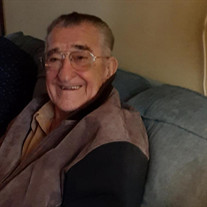 Edward P. Draugelis, Sr., age 90, of Danville, passed away on Friday evening, October 23, 2020, a patient of the Geisinger Medical Center in Danville. Ed was a resident of his home in Danville since 1995. He was born on Sunday, October 5, 1930 in Girardville, a son of the late John M. and Victoria G. (Touchelaski) Draugelis. Ed graduated from the former Girardville High School in 1948. On June 29, 1952, Ed married his loving wife, the former Shirley M. Davies formerly of Girardville. He was a member of the UMWA local coal mine union #2587. Ed relocated to Philadelphia in 1956 to begin his career as a Tastykake Supervisor. In 1967, Ed accepted a salesman position with Tastykake and moved back to his beloved coal region. He proudly raised his family in Cresswell Gardens, Ashland. Ed was an active member of numerous Butler Twp. and Schuylkill County civic groups. His favorite would always be the Cardinal Brennan Men's Society. As a salesman for Tastykake, Ed trained other salesmen for the company. He earned numerous awards during his successful Tastykake salesman career. His proudest award was an all expense paid one week vacation to Paris. Ed & Shirley, along with another couple from Tastykake boarded the Concorde and were honored guests at The Hotel De Crillon. Ed retired in 1986 from Tastykake after 30 years. His love for salesmanship lead him to earn his real estate license and begin working for Kaplan Reality, Frackville. That lead to an opportunity to sell new construction at Valley of The Lakes, Hazleton. In 1995, Ed finally decided to actually retire. He and Shirley built a home in the Meadows Retirement Community, Danville. They both became active members of the retirement community. They organized trips, dinners and many social activities and volunteered for Red Cross blood drives. Ed organized and taught a bible study class for many years. He volunteered and escorted patients for the Maria Joseph Manor Nursing Home and Emmanuel Center to various appointments. He also became an active member for the Residents Counsel. Ed was a member of St. Joseph Roman Catholic Church, Danville, he embraced and loved his Roman Catholic faith. He and Shirley proudly attended many March for Life rallies in Washington, DC. Ed also loved sports, hunting, fishing, coupon shopping, politics and his Lithuanian heritage. He and his two sisters, Mary and Florence spent two weeks touring and visiting relatives in Lithuania in July, 1998. In 2004 he toured Germany, Austria and Switzerland with his grandson Ricky. He never missed any of his grandson's sports activities or events. He became an excellent baker and would always whip up a cake for a sick neighbor. In addition to his parents, Ed was also preceded in death by two sisters, Helen Draugelis, Anne Malarkey, three brothers, John Draugelis, Blaise Draugelis, and Joseph Draugelis. Survivors include his beloved wife of 68 years, Shirley M. Draugelis; a son, Edward P. Draugelis, Jr. of York, a daughter, Lynn A. wife of Richard Wetzel of Ashland, he was a proud grandfather of his two grandsons, Richard Wetzel, Jr. of Salisbury, MD, Jess Wetzel of Ashland, two sisters, Florence Smith of Danville, and Mary Draugelis of Danville. A Mass of Christian Burial will begin at 10:00 am on Thursday, October 29, 2020 at St. Joseph's Catholic Church, 68 Center St., Danville with Rev. Timothy D. Marcoe, celebrant. Graveside committal services will immediately follow in All Saints Cemetery, Elysburg. The Allen Funeral Home, Inc., 745 Market at Eighth Streets, Bloomsburg is honored to be serving the Draugelis family. Memorial contributions in Edward's name are suggested to: Eternal Word TV Network, 5817 Old Leeds Road, Irondale, AL 35210 9948 or Your Loving Choices, Inc., 904 Market St., Bloomsburg, PA 17815.

Edward P. Draugelis, Sr., age 90, of Danville, passed away on Friday evening, October 23, 2020, a patient of the Geisinger Medical Center in Danville. Ed was a resident of his home in Danville since 1995. He was born on Sunday, October... View Obituary & Service Information

The family of Edward P. Draugelis Sr. created this Life Tributes page to make it easy to share your memories.

Send flowers to the Draugelis family.