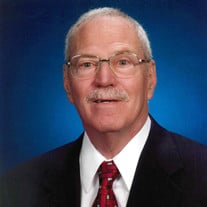 Dudley P. Cooley, devoted husband, father, grandfather, 82, died Wednesday, February 3, 2021, at Geisinger Medical Center with his family at his side. Born June 9, 1938, in Freeport, Illinois, he was the son of Pete E. and Mary G. Cooley of Decatur, Illinois, and later of Somerville, NJ. He and his wife Sue celebrated their 60th wedding anniversary in July 2020. Dudley grew up in Decatur, Illinois, and graduated from St. Teresa High School, where he was known for his speed on the track. He was a 1960 graduate of John Carroll University, Cleveland, Ohio; and he later studied at Roosevelt University and DePaul University, both in Chicago, before receiving his M.B. A. from New York University in 1967. In 1980 he moved to Bloomsburg to become Controller and Chief Financial Officer for the five plant Wise Foods Snack Division, working out of the Berwick Office. Prior to that, he was a financial planning manager in the General Foods Corporation in White Plains, NY. He also worked for Morgan Guaranty Trust Company of New York on Wall Street. After retirement from Wise Foods, he became a financial consultant with Smith Barney, Inc. in their Williamsport office. During his career, he was active in business and civic organizations, serving on the Board of Directors of the First Keystone Community Bank of Berwick for about 20 years following his election in 1987, and on a local Boy Scouts Board. He was a member of St. Columba Catholic Church, where he previously served on the Finance Committee and the Building Fund Campaign Committee. He served in the US Army, Transportation Corps, stationed in Ft. Eustis, VA, attaining the rank of Captain before his honorable discharge. His hobbies included studying investments and taking camping trips with family and friends. His favorite vacation spot was the Lake George, NY, area; and he cherished the memory of the last trip he was able to take there with his family in 2013. Dudley was preceded in death by his parents, Pete and Mary Cooley. He is survived by his loving wife Sue (Suellen Platzbecker), and his 5 children and 8 grandchildren, all of whom he was so very proud: son Steven and his wife Faith, and grandson Christopher Cooley of Crofton, MD; son Peter and his wife Ai Chuan of West New York, NJ; son Brandon and granddaughter Priscilla Cooley of Haddonfield, NJ; daughter Jennifer Noonan and grandchildren Kalei and Brendan Noonan of Flourtown, PA; and daughter Deborah Rowe and her husband Sean, and grandchildren Lauren, Grant, Clint, and Hannah Rowe of Selinsgrove, PA. He is also survived by a brother, Patrick Cooley, and his wife Beth of Port Austin, Michigan; and a sister, Mary Ann Hunt, and her husband Robert of Bridgewater, NJ, along with many wonderful nieces and nephews. He will be sorely missed by his canine friends: “Miss Sandy,” who dutifully checked at his bedside the first thing each and every morning; and “Petey,” who enjoyed taking daily naps spread across his lap. Funeral services will be private at the convenience of the family. The Allen Funeral Home, Inc., 745 Market at Eighth Streets, Bloomsburg is honored to be serving the Cooley family. Because Dudley was so proud to live in and be a part of this community, the family suggests that friends wishing to make a memorial contribution do so to a local charity of their choice, such as AGAPE, PO Box 424, Bloomsburg, PA 17815.

Dudley P. Cooley, devoted husband, father, grandfather, 82, died Wednesday, February 3, 2021, at Geisinger Medical Center with his family at his side. Born June 9, 1938, in Freeport, Illinois, he was the son of Pete E. and Mary G. Cooley... View Obituary & Service Information

The family of Dudley P. Cooley created this Life Tributes page to make it easy to share your memories.

Send flowers to the Cooley family.