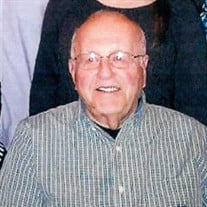 Doyle G. Dodson, age 85, of Bloomsburg, passed away on Monday, November 23, 2020, at his Montour Twp. home, where he resided for the past 33 years. He was born on Sunday, May 12, 1935 in Fishingcreek Twp., a son of the late Glenn and Lena (Stoker) Dodson. Doyle graduated from the Benton High School in 1953 and Bloomsburg State Teachers College in 1957. On November 26, 1959, Doyle married his loving wife, the former Barbara R. Stackhouse. Doyle accepted a teaching position and Athletic Director with the East Lycoming School District, later Loyalsock Twp. for two years and resided with his wife in Hughesville until 1967. While in Hughesville he was active with the Hughesville Travelers Baseball team, was co founder of the Ye Olde Cycle Barn, Justice of the Peace and had his own income tax service. Doyle and his family moved to Bloomsburg in 1967 where he had accepted a teaching position at Bloomsburg State Teachers College. He later became Director, Computer Services until his retirement in 1994, after 27 years of service. During his years spent in Bloomsburg he was active with the Bloomsburg Little League Association, coaching and was President of the organization. He and his wife, trained and raced standardbred horses successfully for three decades. He was an avid follower of his children's and grandchildren's sporting activities and followed the Philadelphia Phillies and Eagles with passion. Doyle especially enjoyed spending time with his family, traveling and watching sports activities. In addition to his parents, Doyle was also preceded in death by a grandson, Tristan Ward. Survivors include his beloved wife, Barbara R. Dodson with whom he would of celebrated their 61st wedding anniversary on Thanksgiving day, three children; Rodney G. Dodson and wife Sara of Caledonia, MI, Tenley R. Romero and Tony Pantuso of Fort Lauderdale, FL, Kiley S. wife of Rick Ward of Bloomsburg, five grandchildren, Tyler Dodson and wife Joelle of Kentwood, MI, Amy wife of Ryan Dronek of Appleton, WI, Lindsey Ward and partner Brandon Gottstein of Trinity, FL, Casey Ward and fiance Robyn Klingerman of Bloomsburg, and Melanie Romero and partner Gavin Edwards of Basalt, CO. He will be remembered for his warm, easygoing and playful conversation, his pride in his family, a wonderful husband, father and grandfather. Due to the current pandemic a private service and burial will be held in Pleasant Hill Cemetery, Hughesville. The Allen Funeral Home, Inc., 745 Market at Eighth streets, Bloomsburg is honored to be serving the Dodson family. Memorial contributions in Doyle's name are suggested to: Animal Resource Center, PO Box 439, Bloomsburg, PA, 17815, SPCA, 2801 Bloom Road, Danville, PA, 17821, or an organization of the donor's choice.

The family of Doyle G. Dodson created this Life Tributes page to make it easy to share your memories.

Send flowers to the Dodson family.