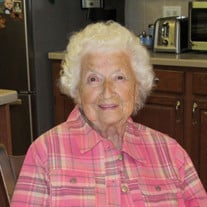 Dorothy Kehoe, age 93, of Danville, went home to be with the Lord on Saturday, January 16, 2021, a patient of the Geisinger Medical Center in Danville. She was born on Friday, August 5, 1927 in Whitestone, NY, a daughter of the late Steve and Pauline (Squarla) Domanick. Dorothy was married to her husband Robert George Kehoe for 52 years when he preceded her in death on June 7, 2004. She was employed at Boone's Nursing Home, Eyersgrove until her retirement in 1989 and later worked part-time at Auntie Anne's at the Columbia Mall. Dorothy was a member of the Emmanuel Baptist Church. Her hobbies included gardening, sewing, cooking and being with her family. Her family was the most important thing to her. Dorothy had an outgoing personality, making friends wherever she went. In addition to her parents and husband, Dorothy was also preceded in death by five brothers; Joseph, John, Michael, Frank and George Domanick. Survivors include her beloved six children; William Kehoe and wife Sharon of Millville, James Kehoe and wife Diane of Jerseytown, Daniel Kehoe and wife Sherry of Catawissa, Joseph Kehoe and wife Ellen of Bloomsburg, Catherine wife of David Stiner of Benton, Jane wife of Ronald Carter of Mountain Top, sixteen grandchildren and eighteen great grandchildren. Private services will be held at Emmanuel Baptist Church with Rev. Micah Felber and Rev. Daniel Potter, officiating. Private graveside committal services will immediately follow in the Millville Cemetery. The Allen Funeral Home, Inc., 107 West Main at Railroad, Streets, Millville is honored to be serving the Kehoe family. Memorial contributions in Dorothy's name may be made to: Emmanuel Baptist Church Memorial Fund, 1314 State Rte 254, Millville, PA 17846.

Dorothy Kehoe, age 93, of Danville, went home to be with the Lord on Saturday, January 16, 2021, a patient of the Geisinger Medical Center in Danville. She was born on Friday, August 5, 1927 in Whitestone, NY, a daughter of the late... View Obituary & Service Information

The family of Dorothy Kehoe created this Life Tributes page to make it easy to share your memories.

Send flowers to the Kehoe family.