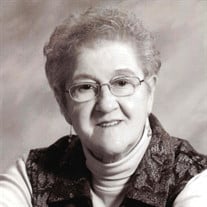 Doris Dawn (Derr) Schell, age 88, of Bloomsburg, passed away on Saturday, October 17, 2020, a resident of the Grandview Nursing and Rehabilitation Center, Danville. Doris was born in Mainville on Nov 5, 1931 to the late Benjamin and Sara (Wynings) Derr and resided in the same house her entire life. She attended the Main Township School and then Bloomsburg High School where she graduated in 1949. She married Lerald Allen Schell in 1951 after his return from Germany at the end of WWII. Doris worked as a sewing machine operator until she had her children and stayed at home to care for them and her elderly mother. She went back into the workforce in 1976 as a matron and cook at Columbia County Prison and took great pleasure in, as she would say, " seeing some inmates turn their lives around and become better people." She truly saw the best in everyone she met. She worked there 21 years until her retirement in 1997. During those years she took pride in taking good care of the female inmates and serving delicious meals to the inmates and staff as well as an occasional meal to members of the police department, sherrif's department and county commissioners. Doris and her husband, "Bub" celebrated their 50th Wedding Anniversary in 2001. He passed away shortly thereafter on October 17th. Coincidently, Doris also passed away on October 17th. In addition to her parents and husband she was preceded in death by six brothers, Robert, Glenn, Myron, Fred, Lee and Wilmer Derr. Doris attended church faithfully. She was an avid gardener and nature lover. She enjoyed family picnics, parties, and holiday gatherings. She was a fabulous cook and baker and was most happy when she could share her "goodies" with others. Up until a few months ago she was still cooking Sunday dinners for her family. She is survived by and will be sadly missed by her daughter, Lisa McGinty and her husband, Frank, of Bloomsburg, her son, Layne Schell and his wife, Lisa, of Mainville, and her two grandchildren, Lauren McGinty and Trevor Schell, as well as several nieces and nephews. She leaves behind her beloved cat, Teddy. Doris was a 78 year member of Emanual Lutheran Church in Mainville and a member of the Ladies Aid Society for which she served as President for many years. She belonged to the Mainville Fire Company Auxillary and the Mainville Sportsmen's Club Auxillary when the club was founded. She was also an Auditor for Main Township, being sworn in again this year to carry out those duties. Doris was very active in church and community events including bicentenial preparations, parades, carnivals and the infamous chicken and waffle dinners at her church. She believed in our democratic process and cooked and volunteered at the voting polls for many years. She was an accomplished seamstress and crocheted beautifully. She created afghans for everyone in the family as gifts for special occasions. Doris will always be remembered for her love of God, her love for her family, her kind manner, and for the self-less life she led, always putting others before herself. A time of visitation for family and friends will be held on Friday October, 23, 2020, from 10:00 am to 11:00 am at the Allen Funeral Home, Inc., 745 Market at Eighth Streets, Bloomsburg. Funeral services will begin on Friday October 23, 2020, at 11:00 am at the Allen Funeral Home, Inc. with Rev. Christine Kirchner, officiating. Graveside committal services will immediately follow in Elan Memorial Park, Lime Ridge. The Allen Funeral Home, Inc., is honored to be serving the Schell family. Memorial contributions in Doris's name are suggested to: To Emanual Lutheran Church, 112 Maple Drive, Bloomsburg, PA 17815.

Doris Dawn (Derr) Schell, age 88, of Bloomsburg, passed away on Saturday, October 17, 2020, a resident of the Grandview Nursing and Rehabilitation Center, Danville. Doris was born in Mainville on Nov 5, 1931 to the late Benjamin... View Obituary & Service Information

The family of Doris Dawn (Derr) Schell created this Life Tributes page to make it easy to share your memories.

Send flowers to the Schell family.