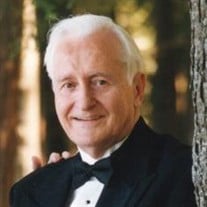 Dr. Donald A. Vannan, age 87, of Bloomsburg, passed away on Monday, August 27, 2018, a patient of the Bonham Nursing & Rehabilitation Center in Stillwater. Donald was a resident of Bloomsburg for over 55 years. Donald was born on Thursday, November 20, 1930 in Danville, a son of the late William D. and Beatrice (Pursel) Vannan. Throughout his younger years, Donald attended the Danville area schools, and later graduated from the Danville High School in 1948. Donald expanded his education by attending Millersville State Teachers College, and graduated with a Bachelors Degree in Elementary Education. While at Millersville he appeared in musicals and was in the chorus, was a cartoonist for the paper, played intramural softball and was made a brother in the Sigma Chapter of Phi Sigma Pi, a national honor fraternity. Donald joined the U.S. Navy during the Korean War and was accepted into Officer Training at Newport, Rhode Island, but medical problems prevented him from completing his training. He was assigned to the Naval Training Station at Bainbridge, MD where he received a Dental Tech Certification and earned Petty Officer Third Class rank, he also worked at the Naval Academy in Annapolis, MD. While in Annapolis, he was accepted as a member of the Baltimore Civic Opera where he appeared in seven opera choruses and had several small solos. Following an honorable discharge in June, 1954, he began to study for his masters and doctorate degrees at Penn State University in Education Administration. Upon graduation he served as teacher and head teacher at several elementary schools. Dr. Vannan was a Professor in the Elementary Education Department at Bloomsburg University for 30 years retiring in 1990. He was awarded Full Professorship and his career entailed writing and having published over 100 articles in leading education publications. Donald wrote the textbook for his classes that was used for many years. He served on many committees and was the founder and co director of the Elementary Education Conferences featuring major leaders in their fields in elementary science and elementary math. Dr. Vannan was founder of the Ring A Day program which checked on the well being of elderly folks living alone and was a 12 year volunteer with Hospice of Columbia and Montour counties. He was a great supporter of all sports at Bloomsburg University and contributed many science articles for the Press Enterprise. Donald was a member of Wesley United Methodist Church, Bloomsburg where he was a baritone choir member for over 50 years. He enjoyed traveling throughout Europe, Canada, Mexico and the United States. Donald was a husband, father, friend to many, writer, singer, professor, volunteer and traveler. He is responsible for training many elementary teachers across America. He and his wife Susan, loved nature, had a cabin on Lake Ganoga in Sullivan County where they spent time hiking, cross country skiing, canoeing and kayaking, they also shared a love of music and theater. On April 6, 1963, Donald married his loving wife the former, Susan Weatherill. In addition to his parents, Donald was also preceded by a brother, William P. Vannan and a sister, Mary Ellen McAllister. Survivors include his beloved wife of 55 years, Susan Vannan of Bloomsburg; a daughter, Kimberly wife of Scott Hansen of Poway, CA; and two grandsons, Kalin Hansen and Jamie Hansen. A time of Visitation for family and friends will be held on Saturday, September 1, 2018 from 10:00 am to 11:00 am at the Wesley United Methodist Church, 130 West Third St., Bloomsburg. Funeral Services will begin on Saturday, September 1, 2018 at 11:00 am at the Wesley United Methodist Church with Rev. Mark F. Reisinger, officiating. Graveside committal services will be private in the Odd Fellows Cemetery, Danville. The Allen Funeral Home, Inc., is honored to be serving the Vannan family. Memorial contributions in Donald's name are suggested to: Wesley United Methodist Church, 130 West Third St., Bloomsburg, PA, The Bloomsburg Public Library, 225 Market St., Bloomsburg, PA 17815 or The Michael J. Fox Parkinson's Foundation, P.O. Box 5014, Hagerstown, MD 21741 5014. Friends and family wishing to send a memorial gift, share a personal memory or offer condolences to the family, a Memorial Tribute Page in Donald’s honor and a Sympathy Store are available at www.Allen FuneralHome.com.

Dr. Donald A. Vannan, age 87, of Bloomsburg, passed away on Monday, August 27, 2018, a patient of the Bonham Nursing & Rehabilitation Center in Stillwater. Donald was a resident of Bloomsburg for over 55 years. Donald was born... View Obituary & Service Information

The family of Dr. Donald A. Vannan created this Life Tributes page to make it easy to share your memories.

Send flowers to the Vannan family.