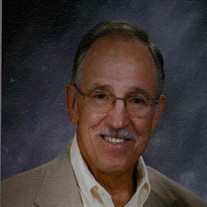 Donald E. Hock, age 82, of Bloomsburg, passed away Saturday, October 5, 2019. Don and his wife Ginger lived in their home in Dutch Hill for over 51 years. He was born on Sunday, July 11, 1937 in Bloomsburg a son of the late Lester and Mildred (Mosteller) Hock. Throughout his younger years, Don attended the Bloomsburg area schools, and later graduated from the Bloomsburg High School. Don expanded his education by attending the University of Arizona and York College and later graduated from Bloomsburg State College. He faithfully served in the U.S. Air Force during the Vietnam War. On April 24, 1964, Don married his loving wife, the former Virginia "Ginger" Holdren. For over 30 years, Don was employed by Bloomsburg University as the Director Of Budget and Administrative Services until his retirement. Don owned Hock's Auction Service in Bloomsburg where he enjoyed running the auctions and helping people. He was a member of the Shiloh Bible Church, Bloomsburg, where he served as a Deacon for many years, he was also a member and past President of the Pennsylvania Auctioneers Association and was inducted into the Pennsylvania Auctioneer Association Hall Of Fame. He was a life member of the Bloomsburg Elks Lodge #436, the Orangeville Sportsmens Club, the Bloomsburg American Legion Post #273, the Bloomsburg Kiwanis Club, was past President of the Bloomsburg Area Jaycees, and a member of the Wednesday morning breakfast club. Don enjoyed spending his time hunting and fishing, playing pinochle, playing golf, watching his grandchildren participate in sports and watching western TV shows. In addition to his parents, Don was also preceded in death by a sister, Louise Norris, and a brother, John Hock. Survivors include his beloved wife of 55 years, Ginger Hock at home, three children Brent A. Hock and wife Stephanie of Bloomsburg, Kristie M. wife of James Kolmansberger of New Cumberland, PA, Seth D. Hock and wife Annie of Santa Margarita, CA, ten grandchildren, Colton Hock, Logan Hock, Blaise Hock, Brody Hock, Hollis Kolmansberger, Braden Kolmansberger, Ashton Kolmansberger, River Hock, Iris Hock, Moses Hock, a brother, Roland "Ron" Hock and wife Louise of Ephrata, and a sister in law, Patricia Hock of Clarks Green, PA. A time of Visitation for family and friends will be held on Saturday, October 12, 2019 from 10:00 am to 11:00 am at the Shiloh Bible Church, 123 Church St., Bloomsburg. Funeral Services will begin on Saturday, October 12, 2019 at 11:00 am at the Shiloh Bible Church with Rev. Dr. Douglas H. Lyon, officiating. The Allen Funeral Home, Inc., 745 Market at Eighth Streets, Bloomsburg is honored to be serving the Hock family. Memorial contributions in Donald's name are suggested to: Shiloh Bible Church, 123 Church Street, Bloomsburg, PA 17815. Friends and family wishing to send a memorial gift, share a personal memory or offer condolences to the family, a Memorial Tribute Page in Donald’s honor and a Sympathy Store are available at www.Allen FuneralHome.com.

Donald E. Hock, age 82, of Bloomsburg, passed away Saturday, October 5, 2019. Don and his wife Ginger lived in their home in Dutch Hill for over 51 years. He was born on Sunday, July 11, 1937 in Bloomsburg a son of the late Lester... View Obituary & Service Information

The family of Donald E. Hock created this Life Tributes page to make it easy to share your memories.

Send flowers to the Hock family.