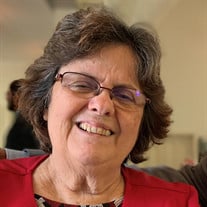 Dolores C. Parker, age 67, of Danville, went to be with The Lord, Monday, December 2, 2019, a patient of the Geisinger Medical Center in Danville. Dolores was a resident of her home in Danville for over 27 years. She was born on Friday, May 9, 1952 in Berwick, a daughter of the late John and Elizabeth (Eichenlaub) Boone. On December 15, 1977, Dolores married her best friend, Clark C. Parker. For over 20 years, Dolores was employed by Beiter's Department Store, Danville, primarily as the Photo Framer until her retirement in 2019 and had previously worked at J.C. Penney at the Columbia Mall for 10 years. Dolores was a member of the Bloomsburg Christian Church. She enjoyed spending her time doing crafts, quilting, sewing, canning, baking and especially loved spending time with her grandchildren and great grandchildren. She also loved her pet cats, Angel, Spooky, Beau, Sadie and Tabby. In addition to her parents, Dolores was also preceded in death by a brother, John Boone. Survivors include her beloved husband of 41 years, Clark C. Parker, at home; two daughters, Dolores A. "Dee" wife of Gregory Cashner of Danville, and Kelley D. wife of Brian Lowe of Bloomsburg; six grandchildren, Lindsey R. wife of Adam Nuss, Johannah E. wife of Christian Sherwood, Rachel A. Lowe, Bryce M. Stigerwalt, Garrett C. Stigerwalt, Jacob C. Lowe; three great grandchildren, Bailey R. Nuss, Kennedy L. Nuss, Connor D. Nuss; and a sister, Vicki Seidel of Berwick. A time of Visitation for family and friends will be held on Thursday, December 5, 2019 from 10:00 am to 11:00 am at the Allen Funeral Home, Inc., 745 Market at Eighth Streets, Bloomsburg. Funeral Services will begin on Thursday, December 5, 2019 at 11:00 am at the Allen Funeral Home, Inc. with Eric Miller, Lead Minister, officiating. The Allen Funeral Home, Inc., is honored to be serving the Parker family. Memorial contributions in Dolores's name are suggested to: ALS Association ,Greater Philadelphia Chapter, 321 Norristown Road Suite 260, Ambler, PA, 19002. Friends and family wishing to send a memorial gift, share a personal memory or offer condolences to the family, a Memorial Tribute Page in Dolores’s honor and a Sympathy Store are available at www.Allen-FuneralHome.com.

Dolores C. Parker, age 67, of Danville, went to be with The Lord, Monday, December 2, 2019, a patient of the Geisinger Medical Center in Danville. Dolores was a resident of her home in Danville for over 27 years. She was born on Friday,... View Obituary & Service Information

The family of Dolores C. Parker created this Life Tributes page to make it easy to share your memories.