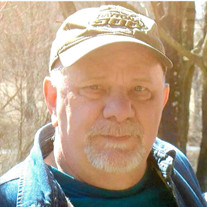 Dennis L. "Denny" Fritz, age 66, of Bloomsburg, died on Wednesday, November 22, 2017, at his home in Scott Twp. Dennis was born on Tuesday, January 2, 1951 in Bloomsburg, a son of the late Robert E. and Ruth (Nungesser) Fritz. Throughout his younger years, Dennis attended the Danville area schools, and later graduated from the Danville High School in 1970. On February 22,1992, Dennis married his loving wife the former, Paula J. Hock of Bloomsburg. Dennis was a self taught plumber and employed by John Jordan Plumbing, Danville until his retirement in 1993. He was a former member of the Bloomsburg Moose L.O.O.M #623. Dennis enjoyed spending his time doing small engine repair and woodworking. His hobbies included hunting, fishing, loved watching the Dallas Cowboys and NASCAR. He was much loved by his nieces and nephews and was known for his dry sense of humor. He loved his pet dog "Willy" and family and friends were very important to him. In addition to his parents, Dennis was also preceded by two brothers, Douglas Fritz and Gary Fritz and by his step mother, Mary Fritz. Survivors include his beloved wife of 26 years, Paula; siblings Grant Fritz and wife Kay of Danville; Linda wife of Randy Francis of Bloomsburg; Edward Fritz of Danville; LeAnn wife of Jeffrey Ulrich of Danville; David Fritz and companion Lisa of Danville. At the request of Dennis there will be no formal services. The Allen Funeral Home, Inc., is honored to be serving the Fritz family. Memorial contributions in Dennis's name are suggested to: Animal Resource Center c/o Linda Bird 301A Boone Road Bloomsburg, PA 17815. Friends and family wishing to send a memorial gift, share a personal memory or offer condolences to the family, a Memorial Tribute Page in Dennis’s honor and a Sympathy Store are available at www.Allen FuneralHome.com.

Dennis L. "Denny" Fritz, age 66, of Bloomsburg, died on Wednesday, November 22, 2017, at his home in Scott Twp. Dennis was born on Tuesday, January 2, 1951 in Bloomsburg, a son of the late Robert E. and Ruth (Nungesser) Fritz. Throughout his... View Obituary & Service Information

The family of Dennis L. Fritz created this Life Tributes page to make it easy to share your memories.

Send flowers to the Fritz family.