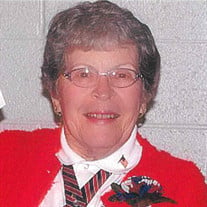 Dawn M. (Leighow) Wright, age 90, formerly of Sherwood Village, Bloomsburg, passed away peacefully on March 12, 2021 and will join Bob, her loving husband of 62 years. Dawn was a resident of Brookdale Bloomsburg Assisted Living since March 2020, and just recently at The Gardens at Millville. Dawn was born on September 16, 1930 in Catawissa to the late Henry Russell Leighow, Sr. and Charlotte Elizabeth (Longenberger) Leighow. She attended Helwig Tank (one-room) School in Catawissa for 8 years, and then graduated from Catawissa High School in June 1948. Dawn worked at the old Regal Shirt Company in Catawissa, and was substitute U. S. mail carrier on the Star Route from Catawissa to Numidia. While a full-time wife and mother, she was employed part-time at the Bloomsburg University Bookstore for 14 years. Dawn and her husband together were very active volunteers in the community, and she continued on after his 2010 death. They were members of the Bloomsburg Civil Air Patrol, React Club, helped with American Red Cross Bloodmobile, and were very active in the American Legion Post 273, Bloomsburg. Dawn continued her active role in Post 273, serving as President of the Auxiliary for several years and then as Vice-President, as well as Chaplain for its Six-County Council. She also supported & assisted her husband while he was Commander of Post 273 for several years, as well as 17th District Commander. Dawn was a life member of Bloomsburg, Espy, and Lightstreet Fire Companies. She was an active member of the Geisinger-Bloomsburg Hospital Auxiliary for more than 40 years, did nursing home visitation, served the local World War II Veterans including their monthly meal at the Espy Fire Hall, and volunteered wherever else she felt she was needed. Dawn worked for many years at the voting polls for Columbia County Board of Elections, and was a very active, life-long member of St. John’s Community Church in Catawissa. Dawn will be greatly missed by (and loved spending time with) her family and many friends. In addition to numerous volunteering, she loved gardening and being outdoors, making crafts, crocheting, knitting, playing bingo, tending to the house and yard, and getting together with her many friends to play games and go out to eat. Dawn was preceded in death by her husband, Robert C. Wright; and two brothers: Leonard E. Leighow and wife, Betty (Zarr), of Millville, and Henry Russell Leighow, Jr. of Danville. Surviving are two daughters: Gayle Martin and husband, Richard, of Harrisburg, and Sheri Hoover and husband, Douglas, of Luzerne; three grandchildren: Ashley Martin of Harrisburg, Damien Dietterick of Moscow, and Shannon Kosloski and husband,Paul, of Luzerne; one great-granddaughter, Amelia Rose Luyster of Moscow; one sister-in-law Barbara (Getkin) Leighow of Danville; and several cousins, nieces, nephews, and great nieces and nephews. A time of Visitation for family and friends will be held onFriday, March 19. from 10:00 a.m. to 11:00 a.m. from the Allen Funeral Home, Inc. 745 Market at Eighth Street in Bloomsburg. Funeral services will begin on Friday, March 19, at 11:00 a.m. from the Allen Funeral Home, Inc., Bloomsburg, with Rev. Charles Swank of St. John’s Community Church in Catawissa, officiating. Graveside services will be held privately for the family in the New Rosemont Cemetery, Espy. The Allen Funeral Home, Inc., is honored to be serving the Wright family. Memorial contributions in Dawn's name are suggested to: Reverend Charles Swank, St. John’s Community Church, 154 North Third St., Catawissa, PA, 17820.

The family of Dawn M. (Leighow) Wright created this Life Tributes page to make it easy to share your memories.

Send flowers to the Wright family.