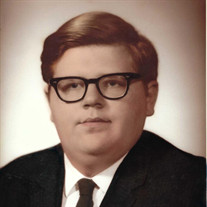 David L. Vietz, age 67, of Bloomsburg, died on Saturday, April 18, 2020, a patient of the Geisinger Hospice Unit in the Geisinger Medical Center in Danville. David was born July 20, 1952 in Bloomsburg, Pennsylvania, the oldest son of the late Richard C. Vietz, who passed in November of 1988 and Bessie R. (Wilson) Vietz, who passed in December 2019. Survivors include his two younger brothers: Dale R. Vietz and wife Diane, of Clarks Green, PA and Larry E. Vietz of Fernville, PA. Dale and Diane’s children: Maria Vietz of Ireland and Brian Vietz of Massachusetts. A lifelong resident of Bloomsburg, David attended Bloomsburg area schools and graduated in 1970. David worked for a year to pay for instruction to become certified in operating heavy equipment. After he successfully completed a rigorous training program, David worked for the former Bloomsburg Sand and Gravel for more than 30 years as a Heavy Equipment Operator. His work contributed to help build and maintain local roads and highways. David was a prolific reader and collected an extensive amount of books and magazines to support his many interests. His vast collection included US history, US military Civil War to present, Special Operations, the Old West, firearms, classic muscle cars, biographies among others. Additionally, David was an enthusiastic firearms collector with a special interest in Colt manufactured hand guns. David also enjoyed his own classic high performance car, a customized 1969 Corvette. David was an active member of the volunteer Bloomsburg Fire Department. When he was younger, he was a firefighter. Then held several elected offices in the fire department for many years. David also served as a Pennsylvania Deputy Constable. David saved his best work in life for last. He lovingly provided round the clock care for his mother Bessie during her period of declining health from 2017 until her passing. The level of patience, perseverance, and devotion to his mother spoke to the immense amount of love and gratitude David had for her. David said, “Mom is my best friend”, and said he was crushed with her loss. A Special thanks to Mary Ann Dalkiewicz and daughter Ann Marie Cantore who provided David and Bessie with the daily necessities of living during the last few years of their lives. The help they provided to David enabled him to take extraordinary care of his mother. David longed to visit and experience the vastness and awe inspiring natural beauty of the Northern Plains and Eastern Slope of the Rocky Mountains. Due to health limitations, he was never able to travel to the area that Lewis and Clark explored 200 years ago. This area inspired him to read, study, and dream throughout his life. As he wished, David will rest in this majestic area eternally. Due to health risks there are no planned services. Friends and family wishing to send a memorial gift please make a contribution in David’s name to Bloomsburg Fire Department, share a personal memory or offer condolences to the family on a Memorial Tribute Page in David's honor at www.Allen FuneralHome.com

The family of David L. Vietz created this Life Tributes page to make it easy to share your memories.

Send flowers to the Vietz family.