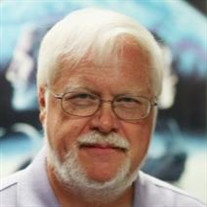 Loved beyond words, Missed beyond measure David Jay Minderhout, 71, of Bloomsburg (Buckhorn) PA, Emeritus Professor and former Chair of the Anthropology Department at Bloomsburg University, passed away at his home on July 4, 2018 after a long and heroic battle with Amyotrophic Lateral Sclerosis (ALS). David was born on Friday, April 13, 1947 in Grand Rapids, Michigan, a son of the late Jay W. and June M. (Emmons) Minderhout. David acquired his Ph.D. in Linguistic Anthropology from Georgetown University, and his M.A. and B.A. in Anthropology from Michigan State University. His fieldwork and dissertation focused on Tobagonian Creole in the Caribbean, while his later research centered on Pennsylvania German ethno pharmacology and contemporary Northeastern Native American political identity. He authored numerous scholarly articles and two books including, Native Americans in the Susquehanna River Valley, Past and Present (2013) and Invisible Indians: Native Americans in Pennsylvania (2008). With the culmination of his research, he was featured in a recently released, WVIA documentary, Peoples of the Susquehanna. Most importantly, Dave was a beloved professor and inspiration to his students and mentees. He worked closely with his students and colleagues to produce collaborative and meaningful research. In his free time, Dave was a passionate reader, who enjoyed historical and contemporary literature. He could often be found reading in his lovely garden. He was also a passionate horticulturist with diverse knowledge of everything from local plants and shrubs to exotic tropical flowers. He greatly enjoyed attending Penn State football games with his wife Bonnie, and keeping up with Major League Baseball, particularly the "Phils" & Detroit Tigers. He was a member of the American Anthropological Association and the Association for Applied Anthropology. He was also an ally for the Eastern Delaware Nation until his health failed. Among his many attributes, he was politically active and always made time for important social issues, a friend in need, or a stray cat. A steadfast cultural relativist throughout his life, Dave had an abiding belief that education is the foundation for overcoming differences and ignorance. In addition Dave fervently believed you could never own too many plants, too many books or too many cats (not necessarily in that order). Throughout his struggle with ALS, Dave never lost his sense of humor, his caring attitude towards others, or his distaste for broccoli, kale, or brussel sprouts. He is survived by his beloved wife of 37 years, Bonnie, former student, co author, and "adopted daughter", Andrea T. Frantz Iverson and her husband David Iverson, both of whom he loved dearly. Dave is also survived by three wonderful & caring brother in laws & three sister in laws, many nieces & nephews, many devoted friends who never allowed ALS to get in the way of a good time, one crazy ADHD Springer Spaniel (Snickers) & 4 loving, albeit spoiled cats. A "Celebration of Life" will begin on Saturday, July 21, at 1:00 pm until 4:00 pm at the Pine Barn Inn, 43 Pine Barn Place, Danville, PA 17821 The Allen Funeral Home, Inc., is honored to be serving the Minderhout family. Memorial contributions in David's name are suggested to: Philadelphia Chapter of the ALS Society, 321 Norristown Road #260, Ambler, PA 19002 or your local, no kill animal shelter. Friends and family wishing to send a memorial gift, share a personal memory or offer condolences to the family, a Memorial Tribute Page in David’s honor and a Sympathy Store are available at www.Allen FuneralHome.com.

Loved beyond words, Missed beyond measure David Jay Minderhout, 71, of Bloomsburg (Buckhorn) PA, Emeritus Professor and former Chair of the Anthropology Department at Bloomsburg University, passed away at his home on July 4, 2018 after a... View Obituary & Service Information

The family of David Jay Minderhout created this Life Tributes page to make it easy to share your memories.

Loved beyond words, Missed beyond measure

Send flowers to the Minderhout family.