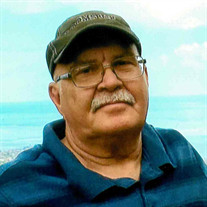 David C. Hilliard , age 69, of Catawissa, passed away on Sunday, April 8, 2018, in the emergency room of the Geisinger Bloomsburg Hospital. David was a resident of his home in Catawissa for over 34 years. He was born on Thursday, October 14, 1948 in Bloomsburg, a son of Nola (Pursel) Crone and the late George E. Hilliard. Throughout his younger years, David attended the Bloomsburg Area Schools. On April 8, 1967, David married his loving wife, Elaine I. (Stewart) Hilliard. For over 18 years, David was employed by Bloomsburg University as a Shuttle Bus Driver. He was a lifetime member of The Espy Fire Company and worked on the Maintenance Crew at The Bloomsburg Fair Grounds for over 23 years. David enjoyed spending his time hunting, bowling and golfing. He was currently serving as the President of The Bloomsburg Merchant Bowling League. David was a lifelong hunter that was featured in Tom's Tracks, a Press Enterprise article of his record setting 11 point buck he shot in 2013 that was best ever in Columbia County and 29th best ever in the state. In addition to his father, David was also preceded by a son, Lee B. Hilliard on March 5, 1969 and by his stepfather, Chancey "Sonny" Crone. Survivors include his beloved wife, Elaine I. Hilliard with whom he celebrated their 51st wedding anniversary on Sunday; his mother, Nola Crone of Catawissa; son, Paul E. Hilliard and wife Shannon of Catawissa; two granddaughters, Kassidy M. and Karissa P. and a sister, Gorgeana wife of Ray Gaugler of Elysburg; many aunts, uncles, nieces and nephews. Services will be private at the convenience of the family with Rev. Susan Rogutski, pastor of Catawissa First United Methodist Church, officiating. The Allen Funeral Home, Inc., 745 Market St., Bloomsburg is honored to be serving the Hilliard family. Memorial contributions in David's name are suggested to: American Heart Association 1704 Warren Ave. Williamsport, PA 17701. Friends and family wishing to send a memorial gift, share a personal memory or offer condolences to the family, a Memorial Tribute Page in David’s honor and a Sympathy Store are available at www.Allen FuneralHome.com.

David C. Hilliard , age 69, of Catawissa, passed away on Sunday, April 8, 2018, in the emergency room of the Geisinger Bloomsburg Hospital. David was a resident of his home in Catawissa for over 34 years. He was born on Thursday, October 14,... View Obituary & Service Information

The family of David C. Hilliard created this Life Tributes page to make it easy to share your memories.

Send flowers to the Hilliard family.