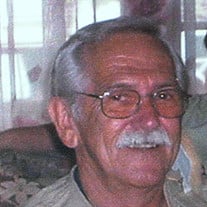 Dale E. Kindig, age 81, of Bloomsburg, passed away on Tuesday, September 25, 2018, a patient of the Bloomsburg Care and Rehabilitation Center. Dale was a resident of Bloomsburg all of his life. He was born on Sunday, June 27, 1937 in Bloomsburg, a son of the late Charles and Jean (Keller) Kindig. Throughout his younger years, Dale attended the Bloomsburg area schools, and later graduated from the Bloomsburg High School in 1955. He faithfully served in the U.S. Navy enlisting in 1955 and was honorably discharged in 1958. On July 18, 1959, Dale married his loving wife, the former Joyce E. Crist. Dale was a self employed electrican and later for over 20 years, he was employed by Commonwealth Electrical Inspection Company, Manheim, PA as an Electrical Inspector. He was a 32nd Degree Mason with the Washington Lodge #265 F&AM and a member of the Bloomsburg American Legion Post #273. Dale enjoyed spending his time hunting, shooting archery, woodcarving, playing golf, hiking, fishing and spending time with his grandchildren. Survivors include his beloved wife of 59 years, Joyce C. Kindig of Bloomsburg, three children, Bonnie J. Sweeney wife of Daniel, Diann L. Vera wife of Roy, both of Bloomsburg, William S. Kindig and wife Kelly of Millville, four grandchildren; Megan Sweeney, Isaac Vera, Madison Kindig, and Carson Kindig. A time of Visitation for family and friends will be held on Tuesday, October 2, 2018 from 6:00 pm to 8:00 pm at the Allen Funeral Home, Inc., 745 Market at Eighth Streets, Bloomsburg. The Allen Funeral Home, Inc., is honored to be serving the Kindig family. Memorial contributions in Dale's name are suggested to: Bloomsburg American Legion, Post #273, 110 Juniper St., Bloomsburg, PA 17815. Friends and family wishing to send a memorial gift, share a personal memory or offer condolences to the family, a Memorial Tribute Page in Dale’s honor and a Sympathy Store are available at www.Allen FuneralHome.com.

Dale E. Kindig, age 81, of Bloomsburg, passed away on Tuesday, September 25, 2018, a patient of the Bloomsburg Care and Rehabilitation Center. Dale was a resident of Bloomsburg all of his life. He was born on Sunday, June 27, 1937 in Bloomsburg,... View Obituary & Service Information

The family of Dale E. Kindig created this Life Tributes page to make it easy to share your memories.

Send flowers to the Kindig family.