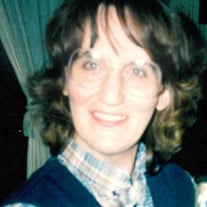 Cynthia L. "Cindy" Schaible, age 72, of Bloomsburg, passed away on Friday evening, December 3, 2021, at Geisinger Medical Center, Danville. She was born on Thursday, January 6, 1949 in Bloomsburg, a daughter of the late Warren and Fern (Drumheller) Shoop. Cindy graduated from Central Columbia High School, Bloomsburg in 1966. She expanded her education by attending Coatesville Hospital School of Nursing, Coatesville, PA. Upon graduation as a RN, Cindy was employed at Walter Reed Army Medical Center as a visiting nurse in Warren County, NJ, and an ICU nurse at The Bloomsburg Hospital. Known to her colleagues affectionately as “Nurse Nana”, Cindy rounded out her employment as an Assessment Supervisor at Columbia Montour Agency on Aging. Aside from gardening, Cindy’s greatest joy was spending time with her grandchildren. In addition to her parents, Cindy was also preceded in death by a brother, Carey Shoop and a beloved aunt, Constance Bednarski. Cindy is survived by her husband of 43 years, Timothy Schaible, Bloomsburg, a son, Phillip Schaible and his fiancé, Chandra Fink, both of Berwick, a daughter Courtney Harris and her husband Josh, both of Bloomsburg, two grandchildren Hailey and Kaleb, brother-in-law Tom Schaible and wife Robin, both of New Jersey, as well as various nieces and nephews. Private services will be held at the convenience of the family with burial in Elan Memorial Park, Lime Ridge. The Allen Funeral Home, Inc., 745 Market at Eighth Streets, Bloomsburg is honored to be serving the Schaible family. The family requests memorial donations in Cindy's name to be made to local charities.

Cynthia L. "Cindy" Schaible, age 72, of Bloomsburg, passed away on Friday evening, December 3, 2021, at Geisinger Medical Center, Danville. She was born on Thursday, January 6, 1949 in Bloomsburg, a daughter of the late Warren and... View Obituary & Service Information

The family of Cynthia L. "Cindy" Schaible created this Life Tributes page to make it easy to share your memories.

Send flowers to the Schaible family.