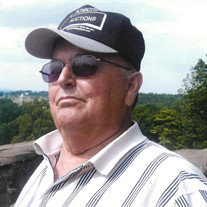 Curtis H. "Pork" Shaffer, age 81, of Bloomsburg, passed away on Monday, April 26, 2021, a patient of the Bonham Nursing & Rehabilitation Center, Stillwater. Pork was born on Thursday, September 28, 1939 in Bloomsburg, a son of the late Martha (Bucher) Shaffer. Throughout his younger years, Pork attended the Bloomsburg area schools, and later graduated from the Bloomsburg High School in 1958. On February 25, 1960, Pork married his loving wife, the former Dorothy "Dot" McGallicher. He got a job at Magee Carpet Company where he worked in various departments and also drove Harry Magee where ever he needed to go. He worked there until 1976 when he went to work for Haddon Craftsman as a pressman until he retired at the age of 62. He enjoyed spending his time golfing, archery, fishing, landscaping including stone work, waterfalls and ponds, muzzle loader, bow and gun hunting. He mentored two Pennsylvania state archery champions. Pork was a handful early on in his life. In first grade he no sooner got a cast removed from breaking his arm when on the same day he broke his other arm falling out of a tree. He had a hard time staying out of mischief and was found in elementary school rolling cannon balls down the hill at the cemetery on First Street. His Aunt Joan was kept busy trying to keep him out of trouble. He became a caddy where he developed his interest and skills in golf. He lived his later years for his grandchildren. There was nothing he loved more than spending time with them. He looked forward every year to their camping vacations in Lancaster. He went to all their events, whether it was a sporting event, a gingerbread house making at school, lunches, bike rides, dances, chorus concerts, etc. At 68, he was thrilled to know he was going to be a grandfather again and loved playing with his youngest grandson Blake Curtis. As his disease progressed, his grandchildren were a comfort to him. He enjoyed hearing about their activities and accomplishments. He passed away after a long difficult battle with dementia. We would like to thank those that continued to go see him despite his illness. Special thanks to Dean Clossen and Dan Bower. Your visits meant so much to us. Thank you to the staff at Bonham Nursing & Rehabilitation Center. Your care, compassion, and constant kindness shown our dad and us means so much to us. Our only wish is that we would have found your facility sooner. We just didn't know such a wonderful place existed. Survivors include his beloved wife of 61 years, Dorothy "Dot" Shaffer; three children, Kelly wife of H. Wade Bower of Bloomsburg, Kim wife of Jeffrey Cromis of Orangeville, David G. Shaffer and wife Kathi of Bloomsburg, five grandchildren; Blake C. Bower of Bloomsburg, Megan A. Cromis of Orangeville, Melanie L. Cromis of Orangeville, Daniel D. Shaffer of Bloomsburg, Rachel A. Shaffer of Bloomsburg, an aunt who was like a sister, Joan Keyser of Bloomsburg, a brother-in-law, Richard McGallicher and wife Debra of Bloomsburg, as well as other extended family members. At the request of the deceased there will be no services. The Allen Funeral Home, Inc., 745 Market at Eighth Streets, Bloomsburg is honored to be serving the Shaffer family. Memorial contributions in Curtis's name are suggested to: Fernville Family Park, c/o Hemlock Township, 26 Firehall Road, Bloomsburg, PA 17815, Memo: Fernville Family Park or Bonham Nursing & Rehabilitation Center Activity Department, c/o Bonham Nursing & Rehabilitation Center, 477 Bonnieville Road, Stillwater, PA 17878.

Curtis H. "Pork" Shaffer, age 81, of Bloomsburg, passed away on Monday, April 26, 2021, a patient of the Bonham Nursing & Rehabilitation Center, Stillwater. Pork was born on Thursday, September 28, 1939 in Bloomsburg, a son of the... View Obituary & Service Information

The family of Curtis H. "Pork" Shaffer created this Life Tributes page to make it easy to share your memories.

Send flowers to the Shaffer family.