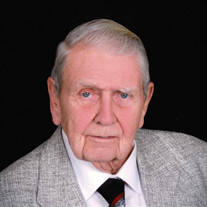 Cortez K. "Cork" Hartman, age 88, of Bloomsburg, went home to be with his Lord and Savior Jesus Christ on Wednesday, October 10, 2018, one day after celebrating his 70th wedding anniversary with his beautiful wife and family at their South Centre Twp. home. Cork was a lifelong resident of Bloomsburg. He was born on Tuesday, May 13, 1930 in Bloomsburg, a son of the late Cortez C. and Erma K. (Kyler) Hartman. Throughout his younger years, Cork attended the Bloomsburg area schools, and later graduated from the Bloomsburg High School in 1948. On October 9, 1948, he married his loving wife, the former Blanche Flick. For over 28 years, Cork was employed by Magee Carpet Company from 1948 1976 and in 1976 was a founding member of Bloomsburg Carpet Industries, Inc. where he served as Co Vice President until his retirement in 1986. He was a founding member of the Shiloh Bible Church, Bloomsburg. He served as Superintendent of Bloomsburg Fair Grandstand, he was a 32nd Degree Mason, was a member of Washington Lodge #265, Bloomsburg, Caldwell Consistory and the Scottish Rite. He enjoyed spending his time hunting especially with his grandchildren and great grandchildren as well as watching all of them playing sports. He also enjoyed fishing and watching NASCAR. In addition to his parents, Cork was also preceded in death by two sisters, Beverly Sneidman, and Patricia Eyer, and a son in law, Larry "P Nut" Krum. Survivors include his beloved wife of 70 years, Blanche F. Hartman at home; three daughters, Susan H. Krum of Bloomsburg, Sharon K. wife of Jack Devlin of Bloomsburg, Stephanie S. wife of Rick Hill of Berwick, eight grandchildren, Julie wife of Darin Hock, Shane Devlin and wife Kristen, Jason Krum and wife Tiffany, Shawn Devlin and wife Shanda, Brock Devlin and wife Carrie, Brooke wife of Paul Bowman, Ashley wife of Kevin Dargan, Kayla Hill, and 14 great grandchildren. Private services will be held at the convenience of the family. The Allen Funeral Home, Inc., 745 Market at Eighth Streets, Bloomsburg is honored to be serving the Hartman family. Memorial contributions in Cortez's name are suggested to: Shiloh Bible Church, 123 Church St., Bloomsburg, PA 17815, Geisinger Hospice 100 N. Academy Ave. Danville, PA 17822, or Shriners Hospital for Children 3551 N. Broad St. Philadelphia, PA 19140. Friends and family wishing to send a memorial gift, share a personal memory or offer condolences to the family, a Memorial Tribute Page in Cortez’s honor and a Sympathy Store are available at www.Allen FuneralHome.com.

Cortez K. "Cork" Hartman, age 88, of Bloomsburg, went home to be with his Lord and Savior Jesus Christ on Wednesday, October 10, 2018, one day after celebrating his 70th wedding anniversary with his beautiful wife and family at their South Centre... View Obituary & Service Information

The family of Cortez K. "Cork" Hartman created this Life Tributes page to make it easy to share your memories.