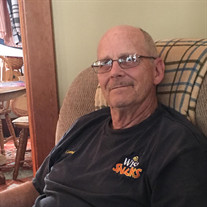 Clyde R. Neeb, age 72, of Bloomsburg, passed away on Wednesday, September 11, 2019, at his residence surrounded by his loving family. Clyde was a resident of his home in Bloomsburg for over 36 years. He was born on Tuesday, August 12, 1947 in Bloomsburg, a son of the late James O. and Isabelle (Fedder) Neeb . Clyde graduated from the Southern Columbia High School in 1968. Clyde faithfully served his country in the U.S. Army during the Vietnam War and was honorably discharged in September, 1971, where he received many notable awards. On May 4, 1979, Clyde married his loving wife, the former Sandra L. Blosser. For over 35 years, he was employed by Wise Potato Chip Co., Berwick as a Truck Driver until his retirement in 2017. He was awarded a plaque for 2 million safe driving miles during his career. Clyde was a member of the Bloomsburg Christian Church. He was also a member of the Berwick V.F.W. #821, where he served as a board member and a member of the honor guard. Clyde enjoyed spending his time watching Nascar and the Pittsburgh Steelers. He loved woodworking, tinkering in his workshop, and spending time with his family, especially his grandchildren. In addition to his parents, Clyde was also preceded by his daughter, Melissa N. Wagner, and a brother, James R. Neeb. Survivors include his beloved wife of 40 years, Sandra L. Neeb, at home; three sons, Steve L. Girton and wife Nicole of Bloomsburg, Michael S. Neeb and wife Suzanne Anderson of Jackson, NJ, Ryan C. Girton and wife Monique of McKinney, TX, a son in law, Matt Wagner of Danville, four grandchildren, Keya Leslie-Girton, Emma Wagner, Tyler Girton, and Katie Wagner, three sisters, Mahala Valencik of Catawissa, Edith wife of Larry Greenly of Albuquerque, NM, Clara Jane wife of Jerry Fowler of Berwick, and a brother, Chris Neeb and Cheryl Fought of Bloomsburg, and his beloved pet and best friend, Mosley. A time of Visitation for family and friends will be held on Tuesday, September 17, 2019 from 10:00 am to 11:00 am at the Bloomsburg Christian Church, 107 Deussen Drive, Bloomsburg. Funeral Services will begin on Tuesday, September 17, 2019 at 11:00 am at the Bloomsburg Christian Church with Eric Miller, Lead Pastor, officiating. Graveside committal services will immediately follow in Elan Memorial Park, Lime Ridge, with military honors being provided by the Berwick, V.F.W. #821. The Allen Funeral Home, Inc., 745 Market at Eighth Streets, Bloomsburg is honored to be serving the Neeb family. Memorial contributions in Clyde's name are suggested to: Bloomsburg Christian Church, 107 Deussen Drive, Bloomsburg, PA 17815. Friends and family wishing to send a memorial gift, share a personal memory or offer condolences to the family, a Memorial Tribute Page in Clyde’s honor and a Sympathy Store are available at www.Allen FuneralHome.com.

Clyde R. Neeb, age 72, of Bloomsburg, passed away on Wednesday, September 11, 2019, at his residence surrounded by his loving family. Clyde was a resident of his home in Bloomsburg for over 36 years. He was born on Tuesday, August... View Obituary & Service Information

The family of Clyde R. Neeb created this Life Tributes page to make it easy to share your memories.

Send flowers to the Neeb family.