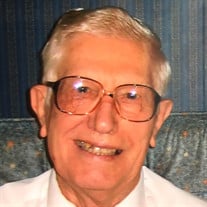 Charles F. Ross, age 97, formerly of Millville, died on October 30, 2018 at Sunset Ridge Healthcare and Rehabilitation in Lightstreet, where he had been a resident for four years. He had been in declining health for several months. Charlie was born on February 25, 1921 in Plainwell, Michigan, the eldest son of the late Lee M. and Gertrude Bowers Ross. He grew up in Herndon, PA, graduating from Herndon High School in 1939, where he excelled in academics, as well as soccer and baseball. Following graduation, he worked as a railroad track laborer, followed by employment at Glenn L. Martin Aircraft Co. in Baltimore, where B26 bombers were made for WWII. In June 1944, Charles was inducted into the U.S. Army, where he served in a combat mortar squad in the Pacific Theater, earning a Purple Heart for combat wounds sustained there. After occupation duty in Japan, Charles was discharged from the army and returned home. He worked in a clothing factory and at Hackett's Hardware in Sunbury. In 1952, he began work at TRW in Danville, where he was in charge of central supply for many years. He left there in 1966 to start his own shoe business, in which he continued for over twenty years. In 1943 Charlie married the love of his life, Jane R. Reed, a union which lasted over 70 years. Much of their life was centered around their Christian faith and church activities. In his later years Charlie attended New Testament Assembly of God Church in Millville and the Millville Area Senior Center. Charlie loved life and was a lifelong learner! He had many hobbies including photography, gardening, fishing, and woodworking. He was an accomplished artist, creating beautiful one of a kind miniature wooden replicas of birds, butterflies, flowers and other objects from nature. He also loved literature, poetry, and word study. Until the final days of his life, he was able to correctly complete the newspaper crossword in under fifteen minutes. Charlie was preceded in death by his wife Jane in 2013 and infant daughter Doris in 1953. Also preceding him in death are brothers Fred, Max, Orryl, and James, and a sister Wanda Reed. He is survived by a daughter, Tana Cooper, wife of David, Jerseytown; three grandsons: Brett Cooper and wife Tania Huusko of Portsmouth, NH; Matthew Cooper, of Bloomsburg; and Ross Cooper and wife Wendy, of Hyde Park, NY. Charlie is also survived by brothers William, of San Francisco, CA; George, of Grass Valley, CA, and sisters Betty, of Horsham, PA; and Bonnie, of Nokesville, VA. Charlie is also survived by seven great grandchildren and several nieces and nephews. He has been entrusted to the care of Allen Funeral Home, Inc., 745 Market Street, Bloomsburg. Burial will be held at the convenience of the family at Pine Hill Cemetery in Elysburg at a later time. Charlie's pastor, Rev. David Rosenberger, will lead a memorial service celebrating his life at Allen Funeral Home, Inc., Sunday, November 11, 2018 at 3:00 p.m. Friends may call from 2:00 until time of the service. Online condolences may be posted at allen funeralhome.com

Charles F. Ross, age 97, formerly of Millville, died on October 30, 2018 at Sunset Ridge Healthcare and Rehabilitation in Lightstreet, where he had been a resident for four years. He had been in declining health for several months.... View Obituary & Service Information

The family of Charles F. Ross created this Life Tributes page to make it easy to share your memories.

Send flowers to the Ross family.