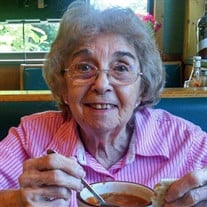 Catherine E. "Kay" Burke, age 86, of Bloomsburg, died on Tuesday, January 31, 2017, a patient of the Signature Health Care of Bloomsburg. Catherine was a resident of Crabapple Lane in Espy for over 50 years. Catherine was born in Schuylkill County on Sunday, September 7, 1930, a daughter of the late Thomas and Catherine (Stabler) O'Brien. Catherine graduated from the St. Joseph Catholic High School of Ashland. Most of her working life, Catherine was employed in Food Service. For over 20 years, she was employed by Bloomsburg University as a Food Service Employee until her retirement. She was a member of the St. Columba Catholic Parish. Catherine enjoyed spending her time reading the newspaper, completing word search puzzles, sitting on porch swings, and spending time with her family, especially her grandchildren. In addition to her husband, Martin P. Burke, who died December 4, 1994, and her parents, Catherine was also preceded by a brother, Francis O'Brien. Survivors include three children: Eileen Burke of Bloomsburg, Sharon (Michael) Hartzell of Bloomsburg, and Patrick (Linda) Burke of Danville; two grandchildren: Sean Hartzell of Bloomsburg and Sarah (Brandon) Hauze of Bloomsburg; and a sister, Rose Marie (Stan) Szulanczyk of Lewisburg, PA. A Memorial Mass will be celebrated on Friday, April 21, 2017 at 10:00 am. in St. Columba Catholic Church, Third and Iron Streets, Bloomsburg, with her pastor, Monsignor Robert E. Lawrence as celebrant. Graveside services will immediately follow in New Rosemont Cemetery, Espy. The Allen Funeral Home, Inc., is honored to be serving the Burke family. Memorial contributions in Catherine's name are suggested to: St. Columba School, 342 Iron St. Bloomsburg.

Catherine E. "Kay" Burke, age 86, of Bloomsburg, died on Tuesday, January 31, 2017, a patient of the Signature Health Care of Bloomsburg. Catherine was a resident of Crabapple Lane in Espy for over 50 years. Catherine was born in Schuylkill... View Obituary & Service Information

The family of Catherine "Kay" E. Burke created this Life Tributes page to make it easy to share your memories.

Send flowers to the Burke family.