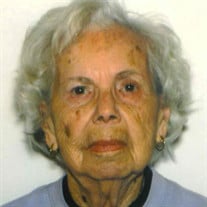 Catalina Martinez, age 96, of Bloomsburg, died on Wednesday, February 22, 2017, at the Grandview Health Home, Danville. Catalina was a resident of the Bloomsburg area for over 11 years. Catalina was born on Wednesday, November 10, 1920 in Garrucha, Spain, a daughter of the late Rodrigo and Carmen (Rodriguez) Ramirez. She became a naturalized American Citizen in 1954. As a child Catalina grew up in southern Spain until the outbreak of the Spanish Civil War caused her (together with her sister and mother) to leave for Barcelona and later, France. However, on the breach of World War II, her father, already a steel worker in the United States, sent for his family to reunite with him in Gary, Indiana. During her younger years, Catalina attended the schools in Spain. She enjoyed spending her time cooking and caring for her family. In 1944 Catalina married Antonio Martinez, who died on February 6, 1992. Catalina was also preceded in death by her daughter, Adelaide Wiist on December 13, 2016. Survivors include her daughter, Carmen Maria Martinez of Essen, Germany; son in law, Stephen R. Wiist of Bloomsburg, grandchildren: Catherine M. Wiist of Bloomsburg, Dr. Stephen W. Wiist of Cary, NC, and Andrew A. Wiist of Mechanicsburg; and a sister: Encarna Boster Henderson of Riverside, CA. Private services will be held at the convenience of the family. The Allen Funeral Home, Inc., is honored to be serving the Martinez family. Memorial contributions in Catalina's name are suggested to: SPCA 2801 Bloom Road Danville, PA 17821.

The family of Catalina Martinez created this Life Tributes page to make it easy to share your memories.

Send flowers to the Martinez family.