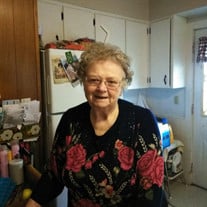 Carolyn "Sue" Brown, age 82, of Jerseytown, passed away on Sunday, November 3, 2019, a resident of the Grandview Health and Rehab Center, Danville. Carolyn was a resident of Jerseytown most of her life. She was born on Thursday, April 15, 1937 in Jerseytown, a daughter of the late Richard "Kelly" and Ethel (Rishel) Holdren. Throughout her younger years, Carolyn attended the Millville area schools, and later graduated from the Millville High School in 1955. For over 30 years, she was employed by Danville State Hospital as an Aide until her retirement in 1997. Carolyn enjoyed spending her time quilting, reading, playing bingo, playing cards with friends and family and rooting for the Philadelphia Phillies. She loved to travel and spend time with her grandchildren and great grandchildren. In addition to her parents, Carolyn was also preceded in death by a brother, Ronald "Buck" Holdren, and a brother in law, Donald E. Hock. Survivors include her beloved children; Stacie L. wife of Jennings Robert Johnson of Nescopeck, Scott H. Brown and wife Ann of Millersville, five grandchildren, Megan Brown, Robbie Brown, Jeremy Johnson and his significant other Becky Bromley, Samuel Johnson, and Zachary Johnson, two great grandchildren, Jeremy Johnson, Jr., and Alania Johnson; a sister, Virginia "Ginger" Hock of Bloomsburg, two brothers, Richard "Dick" Holdren and wife Donna of Jerseytown, Gary "Ned" Holdren and wife Barbara of Hughesville, and a sister in law, Margaret "Peg" Holdren of Palmyra. Graveside funeral services will begin on Saturday, November 9, 2019 at 10:00 am at the Jerseytown Cemetery with Rev. Dr. Douglas H. Lyon, pastor of Shiloh Bible Church, Bloomsburg, officiating. The Allen Funeral Home, Inc., 107 West Main at Railroad Streets, Millville is honored to be serving the Brown family. Memorial contributions in Carolyn's name are suggested to: Geisinger Hospice 100 N. Academy Ave., Danville, PA, 17822. Friends and family wishing to send a memorial gift, share a personal memory or offer condolences to the family, a Memorial Tribute Page in Carolyn’s honor and a Sympathy Store are available at www.Allen-FuneralHome.com.

Carolyn "Sue" Brown, age 82, of Jerseytown, passed away on Sunday, November 3, 2019, a resident of the Grandview Health and Rehab Center, Danville. Carolyn was a resident of Jerseytown most of her life. She was born on Thursday,... View Obituary & Service Information

The family of Carolyn "Sue" Brown created this Life Tributes page to make it easy to share your memories.

Carolyn &quot;Sue&quot; Brown, age 82, of Jerseytown, passed away on Sunday,...

Send flowers to the Brown family.