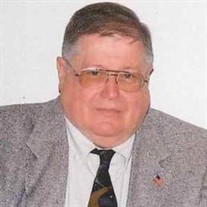 Carl Leonard Millard Jr., 79, of Bath (Moore Township) died on April 29, 2021, at St. Luke’s Hospital Anderson Campus in Easton after many years of declining health. He was born on February 25, 1942, in Bloomsburg, PA the son of the late Carl L Millard Sr. and Mary (Gosciminski) Millard. Carl, known as Junior by his family and boyhood friends, was a 1960 graduate of Bloomsburg High School. He later graduated in 1964 with a Bachelor’s Degree in Business Education from Bloomsburg State College, now known as Bloomsburg University, and added a Masters Degree in Business Education from Bloomsburg State in 1968. After college graduation, he embarked on a 40-year high school education career, teaching at Delaware Valley High School in Frenchtown, NJ for one year and at Pen Argyl High School in Pen Argyl for 39 years, primarily instructing business education, consumer economics, accounting, and typing until he retired in 2004. In 2006, the Pen Argyl Education Association presented him with the Pennsylvania State Teachers Association (PSEA) Friend of Education Award. During his teaching career, Carl was well-liked by many of his students and fellow teachers at Pen Argyl, who appreciated his outgoing, sociable nature. In addition to his teaching career, before his retirement, Carl worked for the United Parcel Service and as an auditor for Moore Township, Northampton County. Carl’s favorite hobby was coin collecting. He served as the president of the Lehigh Valley Coin Club and was a member of the Bethlehem, Allentown, and Phillipsburg (NJ) coin clubs. His passion for coin collecting was recognized by his peers, who named him the Lehigh Valley Numismatist of the Year in 1985. Carl was also a member of various, other social clubs in the Slate Belt and Lehigh Valley; he was a 4th degree Knight with the Knights of Columbus Father DiNisco Council 3862 in Bangor, a past president of the Pen Argyl Exchange Club, and a member of the Northampton Exchange Club. He was a long-time member of Sacred Heart Church in Bath and a former member of St. Roch’s Church in West Bangor. Carl avidly followed baseball and was a lifelong fan of the New York Yankees. He also regularly attended Lehigh Valley IronPigs games during their first 10 seasons of existence. Junior was a shareholder in the Bloomsburg Fair, one of his greatest lifelong passions. He attended the fair every year it was held from 1942 to 2018, and never missed an opportunity to sample the fair’s food offerings and spend time with his friends in “the Railroad Street gang” when visiting the fair. Finally, Junior enjoyed deer hunting with his friends and brother Joe, though his real passions during those outings involved socializing and eating Tastykakes rather than finding deer. Surviving family members include his wife of 55 years Carole (DeFrancisco), and sons Carl III “Chip” of Silver Spring, MD, Christopher of Bath, and Craig of Starkville, MS. Other survivors include his sisters Jean (Mike) Kosh of Redwood City, CA and Patty Shutt of Las Vegas, NV, brothers Joe (Mary) Millard of Sunset Beach, NC and David (Rita) Millard of Berwick, brothers-in-law Sam DeFrancisco of Bakersfield, CA and Tom (Eileen) DeFrancisco of Middletown, sister-in-law Kathy (Scott) Rex of Berwick, and various nieces and nephews. Besides his parents, he was also predeceased by his brother Edward Millard, brother-in-law Bill Shutt, and sister-in-law Emily Millard. A time of Visitation for family and friends will be held on Tuesday evening, May 4th , from 6 to 8 PM on at the James B. Gaffney Funeral Home, 200 S. Robinson Ave. Pen Argyl, PA. A second time of Visitation for family and friends locally will be held on Wednesday evening, May 5th from 5- 7 PM at the Allen Funeral Home, Inc.,745 Market at Eighth Street in Bloomsburg. Funeral services will begin on Thursday morning, May 6th at 10 AM at the Allen Funeral Home, Inc. in Bloomsburg with Monsignor Robert E. Lawrence of the St. Columbia Catholic Church as celebrant. Graveside committal services will immediately follow in the Elan Memorial Park Cemetery, Lime Ridge. The Allen Funeral Home, Inc. is honored to be serving the Millard family. Memorial contributions in Carl's name are suggested to: St. Jude Children’s Hospital, 262 Danny Thomas Place, Memphis, TN. 38105.

Carl Leonard Millard Jr., 79, of Bath (Moore Township) died on April 29, 2021, at St. Luke&#8217;s Hospital Anderson Campus in Easton after many years of declining health. He was born on February 25, 1942, in Bloomsburg, PA the son of the late... View Obituary & Service Information

The family of Carl Leonard Millard, Jr. created this Life Tributes page to make it easy to share your memories.

Send flowers to the Millard family.