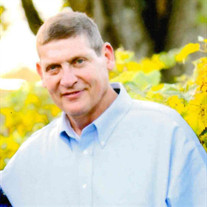 Calvin F. O'Brien, Jr., age 63, of Bloomsburg, died on Monday, January 30, 2017, at his home. Calvin was a resident of his home in Scott Township for over 24 years. Calvin was born on Monday, February 16, 1953 in Williamsport, a son of the late Calvin F., Sr. and Evelyn M. (Price) O'Brien. Calvin attended and later graduated from the Loyalsock High School in 1971. On May 20, 1978, Calvin married his loving wife, Patricia "Patty" Frederick. For over 40 years, Calvin was employed by Canteen Vending and was a Branch Manager at the time of his retirement in 2011. He most enjoyed spending time with his granddaughter. Calvin was a member of the Bloomsburg American Legion #273. Calvin was a fan of the Zac Brown Band, he was an Indianapolis Colts fan, he enjoyed visiting the Outer Banks, and was an active volunteer with Agape. In addition to his parents, Calvin was also preceded by a brother: David E. O'Brien. Survivors include his wife: Patricia "Patty" O'Brien of Bloomsburg, son: Seann C. (Stephanie) O'Brien of Orangeville, granddaughter: Emma Grace O'Brien; sisters: Jo (David) Davis of Macungie and Karen Harper of Williamsport. A time of Visitation for family and friends will be held on Friday, February 3, 2017 from 5:00 pm to 7:00 pm at the Allen Funeral Home, Inc., 745 Market at Eighth St., Bloomsburg. Funeral Services will begin on Saturday, February 4, 2017 at 10:00 am at the Allen Funeral Home, Inc. with Rev. Gordon E. Smith, pastor of St. John Lutheran Church, officiating. Graveside committal services will immediately follow in the New Rosemont Cemetery. The Allen Funeral Home, Inc. is honored to be serving the O'Brien family. Memorial contributions in Calvin's name are suggested to: Agape 19 East 7th St. Bloomsburg, PA 17815.

The family of Calvin F. O'Brien, Jr. created this Life Tributes page to make it easy to share your memories.

Send flowers to the O'Brien, family.