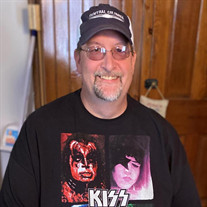 Brian D. Carter, age 53, of Bloomsburg, passed away on Monday, September 7, 2020, at his Scott Twp. home, surrounded by his loving family and under the care of Columbia Montour Hospice. Brian fought a courageous battle against cancer for the past nineteen months. He was born on Wednesday, May 31, 1967 in Bloomsburg, a son of David and Ruth Ann (Giger) Carter. Brian graduated from the Bloomsburg Area High School in 1985. On December 10, 2005, Brian married his loving wife, the former Carol L. Tretter. Brian was employed by Columbia Ancillary as a Service Technician. He was a board member for Central Columbia Football Boosters for several years. Brian loved watching his son Garrett play football for Central Columbia Blue Jays and was also an avid Pittsburgh Steelers fan. He found great pleasure in watching a good live band on a Friday night, his favorite local band being HARPO. One of Brian's greatest achievements in life are his children, he was their biggest fan. Brian was a very devoted husband and father. His smile was very infectious and he was well liked by everyone he met. He will be greatly missed by his family and friends. Survivors include his beloved wife of 14 years, Carol L. Carter, his father, David Carter and wife Terry Cox of Bradenton, FL, his mother, Ruth Ann Carter and Joseph Viadella of Mansfield, two daughters, Sharla K. Carter and fiance Blake Morehart of Berwick, Jessica L. Carter and her significant other Kyle Bauman of Bloomsburg, a son, Garrett W. Carter of Bloomsburg, a step son, William Nehez and wife Jessica of Ringtown, three granddaughters, Lillian, Willow, and Allyson, and a brother, Burt Carter and wife Julie of Woodbury, MN. A Celebration of Life will be held privately at the convenience of the family. The Allen Funeral Home, Inc., 745 Market at Eighth Streets, Bloomsburg is honored to be serving the Carter family.

Brian D. Carter, age 53, of Bloomsburg, passed away on Monday, September 7, 2020, at his Scott Twp. home, surrounded by his loving family and under the care of Columbia Montour Hospice. Brian fought a courageous battle against cancer... View Obituary & Service Information

The family of Brian D. Carter created this Life Tributes page to make it easy to share your memories.

Send flowers to the Carter family.