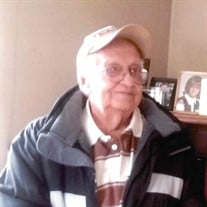 Blaine E. Hartman, age 89, of Danville, passed away on Friday, February 1, 2019, a patient of the Geisinger Medical Center in Danville. Blaine was a resident of his home in Mahoning Twp. for the past 20 years. He was born on Monday, December 23, 1929 in Derry Twp., Montour County a son of the late Norman K. and Maise (Kitchen) Hartman. Throughout his younger years, Blaine attended the Millville area schools, and later graduated from the Millville High School in 1948. He faithfully served his country in the United States Air Force during the Korean War and was honorably discharged in 1952. On November 14, 1953, Blaine married his loving wife, the former Delores A. East. For over 28 years, Blaine was employed by Milco Industries, Bloomsburg in the Knitting Department until his retirement in 1991. Blaine was a 52 year member of the Danville Moose Lodge #1133 where he served as Past District Governor, the Bloomsburg American Legion Post #273, and the 40/8 Club, in Williamsport. Blaine enjoyed spending his time woodworking, and loved spending time with his grandchildren and great grandchildren. In addition to his parents, Blaine was also preceded in death by three daughters, Vicky L. Hartman, Baby Girl Hartman, Marcia A. Hartman, a granddaughter, Bethany M. Flick, a sister, Eva Lowe, a brother, Ronald Hartman, and a son in law, John W. Kitchen. Survivors include his beloved wife of 65 years, Delores A. Hartman at home, four daughters, Patricia A. wife of David Axtell of Stillwater, Aricia M. wife of Terry Ketchem of Danville, Jennifer B. Hartman of Catawissa, and Alainia E. Hartman of Riverside, 11 grandchildren, 23 great grandchildren, 2 great great granddaughters, and a brother Leslie K. Hartman of Benton. Funeral Services will be private at the convenience of the family. The Allen Funeral Home, Inc., 745 Market at Eighth Streets, Bloomsburg is honored to be serving the Hartman family. Friends and family wishing to send a memorial gift, share a personal memory or offer condolences to the family, a Memorial Tribute Page in Blaine’s honor and a Sympathy Store are available at www.Allen FuneralHome.com.

Blaine E. Hartman, age 89, of Danville, passed away on Friday, February 1, 2019, a patient of the Geisinger Medical Center in Danville. Blaine was a resident of his home in Mahoning Twp. for the past 20 years. He was born on Monday,... View Obituary & Service Information

The family of Blaine E. Hartman created this Life Tributes page to make it easy to share your memories.