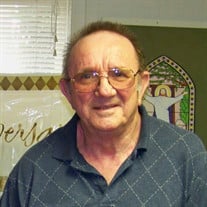 Billy G. "Bill" Slowick, age 81, of Berwick, passed away on Monday, January 14, 2019, a patient of the Geisinger Medical Center in Danville. Bill was a resident of his home in North Centre Twp. for over 55 years. He was born on Monday, May 31, 1937 in Berwick, a son of the late Joseph and Florence (Keck) Slowick. Throughout his younger years, Bill attended the Berwick area schools, and later graduated from the Berwick High School in 1955. On June 6, 1959, Bill married his loving wife the former Jean O. Shaffer. For many years he was employed by U.S. Radium, Bloomsburg and later at Berwick Forge and Fabricating Company until his retirement. Bill enjoyed spending his time hunting, reading, gardening and woodworking. In addition to his parents, Bill was also preceded by two brothers, Joseph A. Slowick, David Slowick, and a brother in law, Harry Woytko, Sr. Survivors include his beloved wife of 59 years, Jean O. Slowick, at home; two children, Renae S. wife of Keith Newhart of Orangeville; and Lee K. Slowick and wife Carla of Nescopeck; four grandchildren Kyle K. Slowick and wife Ashlyn, Alyshia Newhart, Kara S. wife of Andrew Greer, Josh Newhart and wife Marisa, two great granddaughters, Emersyn Newhart, and Sutton Newhart, a sister, Marqueen Woytko, two brothers, Larry Slowick and wife Sandra, and Jerry Slowick and wife Sharon, all of Berwick. A time of Visitation for family and friends will be held on Thursday, January 17, 2019 from 5:00 pm to 7:00 pm at the Allen Funeral Home, Inc., 745 Market at Eighth Streets, Bloomsburg. Funeral Services will begin on Friday, January 18, 2019 at 11:00 am at the Allen Funeral Home, Inc. with Elder Henry N. Shaffer, Brother In Law, officiating. Graveside committal services will immediately follow in the Elan Memorial Park, Lime Ridge. The Allen Funeral Home, Inc., is honored to be serving the Slowick family. Friends and family wishing to send a memorial gift, share a personal memory or offer condolences to the family, a Memorial Tribute Page in Bill’s honor and a Sympathy Store are available at www.Allen FuneralHome.com.

Billy G. "Bill" Slowick, age 81, of Berwick, passed away on Monday, January 14, 2019, a patient of the Geisinger Medical Center in Danville. Bill was a resident of his home in North Centre Twp. for over 55 years. He was born on Monday, May... View Obituary & Service Information

The family of Billy G. "Bill" Slowick created this Life Tributes page to make it easy to share your memories.

Send flowers to the Slowick family.