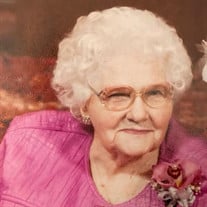 Beverly V. (Strausser) Eveland, age 92, of Catawissa, passed away on Monday, July 19, 2021, a patient of the Evangelical Community Hospital in Lewisburg. Beverly was a resident of her home in Catawissa for over 63 years. She was born on Thursday, July 26, 1928 in Bloomsburg, a daughter of the late Joseph and Lenna (Labour) Strausser. Beverly was a member of Wesley United Methodist Church, Bloomsburg, Catawissa Methodist Church, Southern Columbia Band Boosters, Southern Columbia Football Boosters, and the American Legion in Bloomsburg. Beverly was raised by her parents, Joseph and Lenna Strausser, on 4th Street in Bloomsburg with a sister, Opal, and three brothers, Edward, Robert, and Joseph "Bart". She enjoyed her early years there and frequently told her family stories of playing with large numbers of neighborhood children and sled riding on Wood Street in the winter. She was a staunch patriot and active with her parents in the American Legion and other military circles in that her father was a WWI veteran and mother trained as an army nurse while her brothers were combat soldiers in WWII. Beverly was married to John F. "Jack" Eveland, Sr. for over 50 years and raised two sons in Catawissa, John and Tom. She was a beloved wife and mother who was active with the family in music and sports, and enjoyed fishing in Canada. Her weekends were often spent hosting family dinners and card playing tournaments that were known more for their rowdy antics than for card skills. Among her favorite interests were knitting and crocheting. She made clothing for the family and items from mittens to quilts for which she won awards at the Bloomsburg Fair. Perhaps her favorite interest and greatest achievement was being a Bannie to four granddaughters, teaching them arts and crafts, playing board games, and making them silly dolls. She was an adoring great grandmother to four great granddaughters and two great grandsons. When her sons became more independent, Beverly worked at Letterman's Bakery and in a clothing factory in Catawissa. For years, Bev worked at Krum's Orchard and Country Store near Catawissa where she was a "jack of all trades" handling duties in sales, purchasing and pricing, bakery, stocking, events planning, and filling orders for holiday fruit baskets from far and wide. In her later years, she worked at Knoebels food service catering to large company events for thousands of people during parties at park pavilions. Beverly was the finest wife, mother, grandmother, great grandmother and friend of many people. She is a special woman and will always remain so in the hearts of her family. In addition to her parents and husband, Beverly was also preceded in death by three brothers, Edward Strausser, Robert Strausser, and Joseph "Bart" Strausser. Survivors include her two beloved sons, John F. Eveland and wife Laurie of Delmont, PA, Thomas E. Eveland of Catawissa, four granddaughters; Kelly wife of Kristofer Howdyshell of Johnstown, PA, Lindsay wife of Kevin Sherrets of Cranberry, PA, Haley wife of Zack Gargan of Charles Town, WV, Shanley wife of Alex Augenstein of Delmont, PA, six great grandchildren, Emma Howdyshell, Ethan Howdyshell, Sloane Sherrets, Quinn Sherrets, Reid Gargan, Mabel Gargan and a sister, Opal Strausser of Bloomsburg. A time of visitation for family and friends will be held on Monday, July 26, 2021 from 5:00 pm to 7:00 pm at the Allen Funeral Home, Inc., 745 Market at Eighth Streets, Bloomsburg. Funeral services will begin on Tuesday, July 27, 2021 at 11:00 am at the Allen Funeral Home, Inc. with Rev. Mark F. Reisinger, officiating. Graveside committal services will immediately follow in the New Rosemont Cemetery, Bloomsburg. The Allen Funeral Home, Inc., is honored to be serving the Eveland family. Memorial contributions in Beverly's name are suggested to: Riverwood Senior Living Community, 15 Ridgecrest Circle, Lewisburg, PA 17837.

Beverly V. (Strausser) Eveland, age 92, of Catawissa, passed away on Monday, July 19, 2021, a patient of the Evangelical Community Hospital in Lewisburg. Beverly was a resident of her home in Catawissa for over 63 years. She was born... View Obituary & Service Information

The family of Beverly V. (Strausser) Eveland created this Life Tributes page to make it easy to share your memories.

Send flowers to the Eveland family.