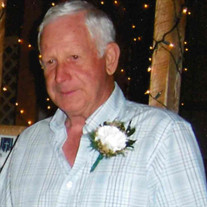 Anthony "Tony" Sokol , age 82, of Bloomsburg, died on Friday, June 17, 2016, at his home in Mt. Pleasant Twp. Anthony was a resident of his Columbia County home for 40 years. Tony was born on Thursday, April 5, 1934 in Somerton PA, a son of the late John and Mary (Kowalska) Sokol. Following high school, Tony faithfully served his country and was honorably discharged from the US Army. On June 16, 1956, Anthony married his loving wife, Janet M. (Raudenbush) Sokol. They enjoyed 62 years of marriage prior to Janet's passing on November 27, 2014. Most of his lifeTony was a farmer. In 1961 he began A. Sokol Excavating. He was a member of the Aircraft Owners and Pilots Association. He was a pilot, at the age of 16 he obtained his pilot's license and owned his own airplane. He enjoyed hunting, NASCAR auto racing and collecting and restoring antique Farmall tractors. In addition to his parents and wife, Anthony was also preceded in death by three brothers: John Sokol, Edward Sokol and Frank Sokol and two sisters: Anne Sokol and Alice Monaghan. Survivors include a daughter, Beth A. Holloway and husband, William, of Millville, PA: four sons, Anthony R.Sokol and wife, Cynthia, of Orangeville, PA, Paul W. Sokol and wife, Debbie, of Bloomsburg, PA, Raymond J. Sokol and wife, Karen, of Bloomsburg, PA and Brian A. Sokol and wife, Kristi of Orangeville; 12 grandchildren, 10 great grandchildren; four brothers, Joseph Sokol of Doylestown, PA, and Daniel Sokol and wife, Joan, of Holland, PA and two sisters: Mary Witalec of Langhorne, PA and Helen Hemmingway of Jefferson, GA. A time of Visitation for family and friends will be held on Thursday, June 23, 2016 from 10:00 am to 11:00 am at the Allen Funeral Home, Inc., 745 Market at Eighth St., Bloomsburg. Funeral Services will begin on Thursday, 11:00 am at the Allen Funeral Home, Inc. in with Rev. Charles Claybourn, pastor of Oranageville United Methodist Parish, officiating. Graveside committal services will immediately follow in the McHenry Hill Cemetery. A combined VFW and American Legion group will provide Military Honors. The Allen Funeral Home, Inc., is honored to be serving the Sokol family.

The family of Anthony "Tony" Sokol created this Life Tributes page to make it easy to share your memories.

Send flowers to the Sokol family.