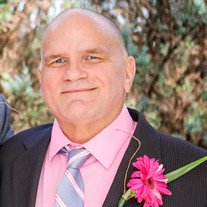 Andrew "Andy" Hess, age 64, of Bloomsburg, passed away on Monday, March 9, 2020, at his Scott Twp. residence where he lived for the past 45 years. He was born on Sunday, December 4, 1955 in Bloomsburg, a son of the late Allen W. and Alma M. (Cole) Hess. Andy graduated from the Central Columbia High School in 1973. On July 5, 1980, Andy married his loving wife, the former Bonnie Lou Knorr. For over 38 years, Andy was employed by Bloomsburg Carpet Industries as a Weaver, until his retirement in 2019. He was a member of the Orangeville Oriental Lodge # 460 F & A M, and the Bloomsburg American Legion Post #273. Andy was known as a devoted family man, he enjoyed vacationing with family and friends, and was a outdoorsman who enjoyed hunting and camping. He coached Central Columbia wrestling for 18 years, he additionally coached soccer and assisted with youth football. He was an assistant Scout Master of Troop 25. He was a lifetime dog lover and currently has three "grand puppies", Happy, Chase and Hope. Most important he was a loving husband to Bonnie Lou and in his words was "not long enough". In addition to his parents, Andy was also preceded in death by two brothers, Arlen Hess, and Arnold "Arnie" Hess. Survivors include his beloved wife of 39 years, Bonnie Lou Hess, at home; two sons, Chad E. Hess and girlfriend Emily Wolfe of Bloomsburg, Drew W. Hess and husband Justin P. Flood of Media, PA; two sisters, Audrey Hess of Lightstreet, and Annette "Ann" wife of Kevin Evans of Orangeville; a brother, Arthur Hess and wife Judy of Orangeville. A time of visitation for family and friends will be held on Thursday, March 12, 2020 from 4:00 pm to 6:00 pm at the Allen Funeral Home, Inc., 745 Market at Eighth Streets, Bloomsburg. Masonic memorial services by the Orangeville Oriental Lodge # 460 F & A M will be held at 6:00 pm. The Allen Funeral Home, Inc., is honored to be serving the Hess family. Memorial contributions in Andy's name are suggested to: American Cancer Society c/o Columbia County Unit 1948 East 3rd. St., Williamsport, PA, 17701.

Andrew "Andy" Hess, age 64, of Bloomsburg, passed away on Monday, March 9, 2020, at his Scott Twp. residence where he lived for the past 45 years. He was born on Sunday, December 4, 1955 in Bloomsburg, a son of the late Allen W. and... View Obituary & Service Information

The family of Andrew "Andy" Hess created this Life Tributes page to make it easy to share your memories.

Andrew &quot;Andy&quot; Hess, age 64, of Bloomsburg, passed away on Monday,...

Send flowers to the Hess family.